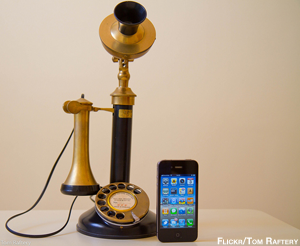 When one gadget is "in", it is almost certain that another gadget is on its way "out."  The lifespan of most modern day technologies is rather short.  We're only just now getting used to the new iPhone 5, and an iPhone 6 is right around the corner!

This being said, there are some gadgets that you simply should put away in a drawer (or donate to a electronic recycling facility).  Here are the top 10 gadgets to avoid in 2014 (inspired by Business Insider).

DVDs are anticipated to reach the same demise as CDs and VHS tapes have before them.  In the age of digital technology like television On Demand, DVR, Hulu, Netflix, HBO Go, iTunes, and Amazon Prime -- DVD players are becoming obsolete.

Don't forget - you can hook up your laptop to your TV if you're really needing a DVD player. Or, if you happen to own a gaming system that reads DVDs as well, you're all set.

With so many Bluetooth headphone sets and car integrations nowadays, it's time to say goodbye to your old Bluetooth headset.  It doesn't compliment your outfit, and there are just so many better options for you.

iPods have become totally obsolete in the age of smartphones.  In fact, 1-function portable devices in general aren't the push of the 21st century as we know it.  Forget having an extra device laying around.  Just pump up your phone with Pandora, iRadio, Spotify, or music of your own.

There's an app for that - or at least a phone gadget add on for that.  Really, your average voice-recording device of today isn't all that different than the voice recorder add-ons for your smartphone or tablet.  If you want superior sound recording than your basic phone or tablet has, simply buy a microphone add-on.  No need for the extra weight (and expense) of a separate voice recorder.

I know how much you love your old graphing calculator, but unfortunately, there just isn't much need for a separate calculating device these days.  Your smartphone app equivalent will do just fine.

Are you that person with the Blackberry?  You clearly must not have seen our article from last October, where the Gartner indicates it is time to abandon the Blackberry ship altogether.  It will be ok.  Let it go.

Unless photography is your profession, it may be time to abandon your camera. Tablets and phones are now producing images and videos with high quality results, so the average user could absolutely get by without an additional camera.

Many homeowners are now choosing to opt out of having a "land-line", instead designating a cell phone to reside at home at all times.  It is often a cost-effective approach to simply add another line onto your current plan for home - or rely only on your cell phones.  There are also voice over IP (VOIP) options like Ooma, Vonage, and MagicJack. We'll get to those in a future article.

It may be time to put those birds to rest, and spend you time more productively.  You know.  With "2046" or something.

"Dumb Phones" is a technical term. ...but seriously, if your phone still has an antenna that you pull out of it, is the size of a small brick, or doesn't know what texting is, where have you been?!  There are decent Android phones that come free with many plans these days, with *gasp* GPS and everything.  You've got this.  Get rid of that old phone.

What tech gadgets do YOU think are on the outs?  Let us know your thoughts!