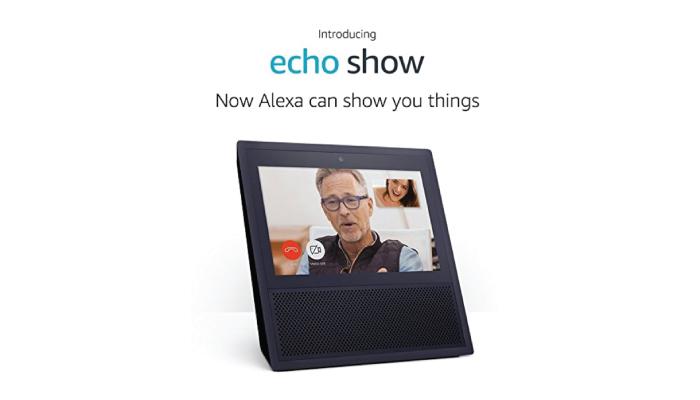 If you’ve ever taken a screenwriting class, then you know that one of the key pieces of advice is to always “show,” rather than “tell.” Well, apparently the creative gurus at Amazon have been dropping in on a seminar or two, because their newest version of the Echo promises to let users show and tell – thanks to a major design move that could completely revolutionize the digital assistant marketplace.

The Amazon Echo Show was unveiled in early May and is set to start shipping on June 28. And you’ve got to see it to believe it… Mostly because, unlike with previous iterations of the Echo, there really is something to see here. Instead of a portable little cylinder, the Show is a wide, square tablet, boasting an enormous, seven-inch touchscreen display on the upper half of the unit.

The addition of that screen offers up a ton of new functions that were previously unavailable using Echo devices; users can now use Amazon’s personal helper, Alexa, to watch videos on YouTube or Amazon Video; to see their playlists on Spotify; to pull up and display pictures from an online library; to quickly and easily control or monitor their smart home appliances; or to get a visual weather report or news story in an instant.

Even more intriguing is Amazon’s emphasis on Alexa Calling, a new feature that turns your Echo Show into an incredibly handy tool for video and voice calls. As of right now, there isn’t Skype functionality, but users can reach out to other Echo fans with the Alexa app, as well as a fascinating feature called “Drop In,” which, as TechCrunch explains, “lets you make a call to someone without them even answering the phone first.” The recipient can then reject the call, or switch to audio-only mode.

“Think of it,” TechCrunch notes,

“as the 21st century tech equivalent of someone coming to your house and either peeking through the front window as they’re knocking, or maybe just walking straight in, 1970s sitcom-style…

Examples of usage can include checking in on elderly relatives, or letting your family in another room know it’s time for dinner — or perhaps making sure you kid is really doing homework and not watching YouTube. Let’s see how people use it as it rolls out.”

As for the quality of those video and phone calls – we haven’t gotten our hands on an Echo Show yet, but USA Today notes that the device features a five megapixel camera and “takes advantage of an 8-microphone array, noise cancellation and so-called beam-forming tech;” the Show also boasts dual two-inch speakers, which USA Today describes as “a step up from the Echo speakers” and “better tuned for playing music.”

Looking to get really see what the Echo Show can do? You can preorder one now for $230; Amazon is also, at the time of this writing, holding a sale that knocks $100 off the price if you order two Shows together, making it easier to give one to a family member or stage them in multiple parts of your home.

We can't wait to get our hands - and eyes and ears - on an Echo Show! In the meantime, we're eager to hear about the gadgets and apps that are on your radar right now. Feel free to let us know what we should check out on Facebook and Twitter!