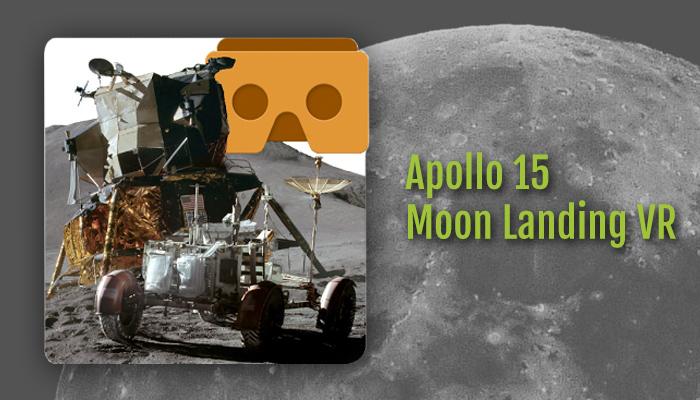 We’re virtual reality junkies here at Geek; we love looking at the latest trends in the VR industry, and we’re just as liable to be found playing with our Google Cardboard as refreshing our Twitter feeds.

So when an app comes along that merges our love of VR experiences with our passion for the stars, we’ve got to share it with you. Enter the Apollo 15 Moon Landing VR.

Released to commemorate the 45-year anniversary of the Apollo 15 mission, this breathtaking VR experience takes users to the surface of the moon and back, using authentic NASA data and footage to recreate what David Scott and James Irwin saw when they touched down on our biggest satellite.

Ever wanted to feel the rumble of a spacecraft settling down onto the lunar surface? To bound across moon rocks? To unpack and drive the lunar rover? Now’s your chance – and you don’t even need to get off the couch to take this once-in-a-lifetime journey.

Want to experience space travel for yourself? The Apollo 15 Moon Landing VR is available for both Google Cardboard and Freefly VR headsets. You’ll want to use headphones and make sure your smartphone is powerful enough to handle this stunning, immersive VR experience.

Think there’s another VR app we need to feature here? We’d love to hear your thoughts on Twitter or Facebook, where we keep the conversation on tech, social media, and digital culture going 24/7.