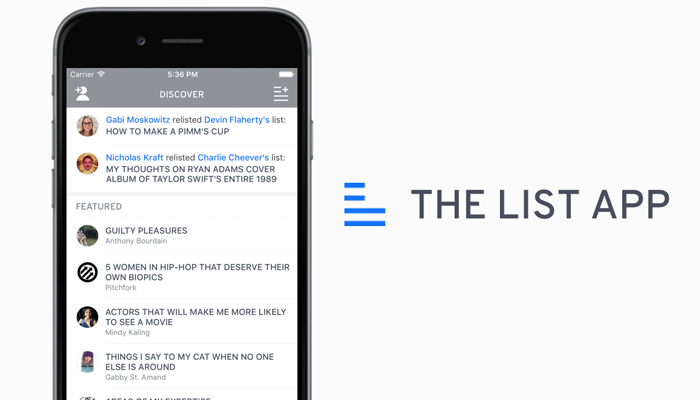 A new app called The List App is as simple as it sounds. It lets you read lists made by other users and create your own. And while that might make it sound like a productivity and planning app, the people who are using it make it far more interesting than that.

An apt description of the List app comes from the co-founder of the company, B.J. Novak, who is best known for playing Ryan Howard from NBC’s “The Office” (he was also an Executive Producer and a writer on the show.)

“We saw a unique opportunity to create a social network built around the simplicity and power of lists,” Novak explains on The List App site. “Human beings are innately inclined towards structuring information; it’s one of our primary means of understanding. Lists are simple, powerful; the gold standard of sorting and sharing information for thousands of years.”

The overall structure of the app resembles social media apps we already know. There’s a search function, a notifications tab, your own customizable profile, and a news feed, where all of your followers’ lists appear in real time.

You’ve got Instagram showcase photos of your dog and Twitter to publish your 140-character quips; now there’s an app to share lists too. And lists are the best.

The List App is free, and available only for iPhone right now.