Beware the Pokerbot – The Poker Player That Can’t Be Beaten 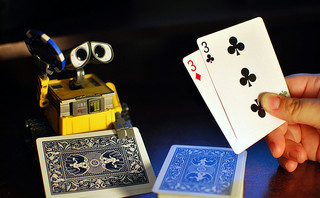 Technology is infiltrating life in ways we may not even expect. One of those areas is the poker arena.

Technology may have just found a way to "solve" poker. What does that mean? Consider a simple game like tic-tac-toe. If player A does one move, then with the goal of winning in mind, player B has an optimal move, guaranteed to put him on a path to victory (or in this game, at least a "draw".) It is a "solved" game.

Poker is way more complicated than that, though... right?

Yes, and no. It seems that this new "pokerbot" artificial intelligence that provides the "brains" over 200 Texas Hold 'Em Heads Up machines across the US basically always comes out on top. The pokerbot uses knowledge that it has from billions of staged rounds of poker, fed through neural networks (essentially a complex decision making formula), resulting in an unpredictable but virtually unbeatable poker player.

In fact, it took the developers 2 years to dumb down the system enough so that players wouldn't walk away. Even so, its estimated that only 100 around the world will be able to beat it on a regular basis.

We reached out to Dave Thornton, the CEO of Skill in Games, a company dedicated to separating out the luck component from the game of poker to measure a player's relative skill quotient to understand whether or not the game has truly been solved. When asked, "is the game of poker solved", he had this to say:

According to the NY Times, this technology may take the leap from casino territory to day-to-day processes:

The technology behind Dahl’s game has the potential to do a lot more than simply taking money from casino customers. Dahl could see it being adapted to make credibility assessments, like deciding who should get a loan, for example, by analyzing applicants in comparison with databases of borrowers who repaid their loans and those who did not.

Hector Levesque, an AI specialist and professor of computer science at the University of Toronto, anticipates this type of technology to jump into search engine territory as well:

The biggest technology coming out of A.I. is getting examples of reasonable behavior and learning from statistics. Google search does so well because it has to do with statistics and adjusts from that. [...] Poker and games are not so far from things that have real economic bite if you can train the neural nets properly.

So, do we know enough to program a poker bot that is more capable than a human across the board? Thornton said this:

We've got the tools, we're just waiting on sufficient computational abilities. But it's not clear when we'll get there - even heads-up limit hold'em has too big a state space for us to solve today. I believe the cutting edge folks tend to work with simplified versions of heads up limit hold'em, just to make the state space computationally manageable. And doing things like adding players, relaxing the betting structure, adding payout convexity, etc. only make the state space bigger.

While we're not planning on gambling against the pokerbot on a frequent basis, we are definitely intrigued with the technology it is introducing to the market. What could this mean for decisionmaking capabilities across the board for small businesses? How could this be applied to optimal strategies for website content and search engine optimization? Share your thoughts in our comments section!