Some Big Ideas on Facebook’s Future 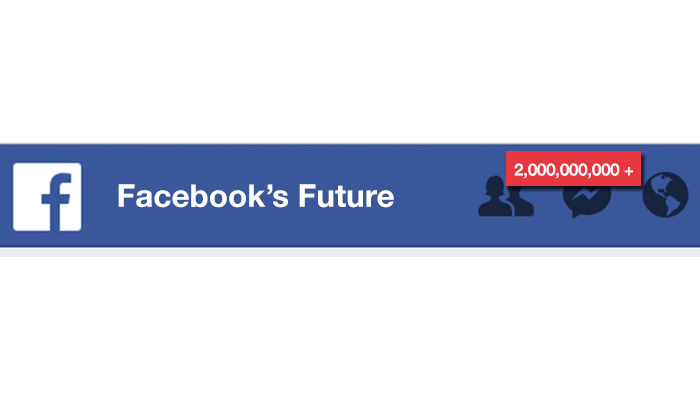 Facebook is one of the biggest media platforms in human history, uniting more than a billion people across the world every single month.

It has completely revolutionized the way we communicate online, popularizing the very concept of social media while also pushing it above and beyond what we thought it could ever be capable of, thanks to its sophisticated feed algorithms, powerful advertising capabilities, and ever-evolving functionality, including the rise of live-streaming video.

As marketers, media junkies, and social media fans, we like to keep on top of the changes coming to social media. Platforms like Facebook are consistently growing and adapting to new trends, and we like to keep an eye on the nitty gritty, whether that means the war on Fake News or the release of a simple new widget.

But there are also signs that Facebook – and the people behind it – will soon be taking a step back and refocusing on broader, more big-ticket ambitions. Might "the little social network that could" soon be reshaping our world… again? Here are a few educated guesses on what the future may hold – if Facebook has anything to say about it:

Plenty of Silicon Valley entrepreneurs have expressed a fascination with aircraft lately; flight is kind of the hot tech trend of 2017, in a lot of ways. But it is only Facebook CEO Mark Zuckerberg, so far, who seems interested in using the power of aircrafts to bring internet connectivity to even the most remote corners of the world.

That’s the goal of a wild Facebook vision called Aquila, which aims to “design, build, and launch an aircraft that can beam down internet access to millions of people from 65,000 feet in the air,” according to a stellar piece from The Verge.

While there are many, many questions left to answer about infrastructure, data support, and regulations for a project like this, Aquila isn’t as far-fetched as it may seem on paper; in fact, Facebook conducted its first flight test last year, and all signs suggest that the tech behind the drone aircraft has only improved since then. Even more encouraging for supporters of the project? Google was working on a similar effort, dubbed Project Titan, but dropped its efforts earlier this year, in what could be seen as a sign that Facebook is dominating the field.

Even the lofty ambitions of Aquila never quite get off the ground, Facebook has already taken numerous steps toward increasing internet connectivity around the globe with its Internet.Org initiative, which includes Free Basics, a platform that brings a higher level of connectivity to technologically underserved areas around the world.

One of Zuckerberg’s top lieutenants opined not too long ago that we were moving toward a post-text culture. The CEO himself sees the future a little differently: He’s planning for our post-smartphone future, and he’s doing so by betting big on augmented reality right now.

At present, the drive for augmented reality experiences is pretty limited. Think Pokemon Go, interactive museum exhibits, or active photo filters, like those that Facebook recently rolled out with its new Camera Effects platform.

And while this may seem a little trivial, the potential of this technology shouldn’t be underestimated. Facebook has been considering applications from developers to access its new AR Studios, and it remains to be seen what those outside eyes could do with the tech, which “will allow developers to use precise location, object recognition and depth detection to create their effects,” according to TechCrunch. Imagine being able to play a game of chess without a physical board in front of you, or look at a restaurant on the street and immediately be able to see Yelp ratings, menu options, or health information without having to lift a finger.

While AR, for now, is largely limited to phones, Zuckerberg sees a not-too distant future where glasses, implants, or contacts make hardware – from smartphones to TV sets – all but obsolete. And this, he insists, will be good news for consumers and creators alike, saying:

“The ability to just have glasses or eventually contact lenses where you can overlay whatever information you want . . .[means] we could put a TV on the wall and have it be a $1 app instead of a $500 piece of hardware that a lot of people can’t afford. So if the glasses cost $500 or whatever it is, you’re saving a ton of money compared to all the other hardware that you would have to buy.”

Plenty of tech wizards have visions of expanding their sphere of influence; some go into real estate, others become patrons of art, and still others become hyper-engaged in philanthropy. But leader of the free world? That would be a new one. But as many prognosticators have pointed out, many signs suggest that a run at the presidency could well be in Mark Zuckerberg’s future.

While Zuckerberg himself has categorically denied that he has political aspirations at the moment, it has become somewhat of an internet sport to point out how closely his media blitzes resemble political campaigns – from rubbing elbows with blue collar workers to delivering a “stump speech” at a college graduation. If you’re interested in following along, sports and culture site The Ringer has been doing a great job at rounding up and analyzing the maybe-sorta-kinda political moves that have defined Zuckerberg’s PR strategy lately.

Of course, there’s a good chance that nothing comes of these Beltway rumors. But the fact that they exist at all is a sign of just how influential Facebook and its head honcho have become – and just how broad and meaningful their future actions could be.

Want to keep the social media conversation going? We’re always down to dish on Facebook or Twitter, so don’t hesitate to get in touch!