The 5 Buzzwords to Nix from Your Content Right Now 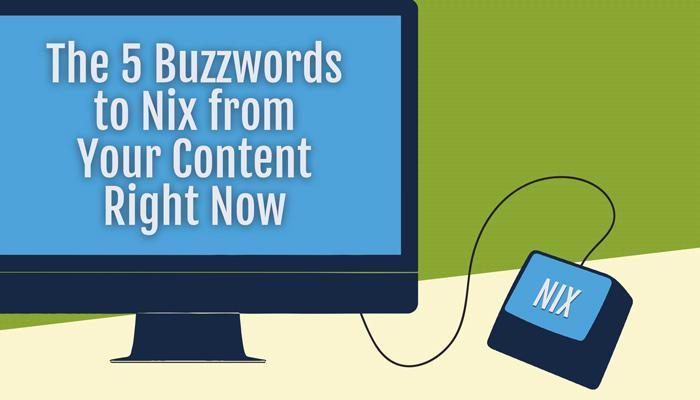 If you want to create email campaigns, blog updates, or social posts that spread your brand message and turn audience members into paying customers, you need to know how to communicate the right way!

And, as it turns out, some of the corporate-speak and trendy buzzwords that you may be using right now just aren’t cutting it anymore. In fact, some common sayings may actually be turning off your audience completely!

This sobering warning comes to us by way of Summit Hosting, which conducted a survey on office jargon in 2017. The company interviewed more than 1000 individuals across industries to figure out which phrases worked in the workplace – and which left people feeling cold.

So, what words made people cringe? Based on their research, here are five all-too-common pieces of slang that may be alienating your prospects:

What does “growth hacking” really mean? Hm? Wikipedia says that it “refers to a set of both conventional and unconventional marketing experiments that lead to growth of a business.” Sean Ellis, who is widely attributed with coining the phrase, once said that “a growth hacker is a person whose true north is growth."

And sure, that’s all well and good. But it sounds a lot like… running a business. Taking risks. Making choices. Doing research.

In short? It’s a lofty, nebulous phrase that complicates something fundamental. There’s a reason why Summit determined that it was in the top three least acceptable buzzwords. Ditch the ambiguity, and refocus on the concrete; odds are, your audience is more interested in the hard data of “who, what, when, where, and why” than PR speak.

Like “growth hacking,” paradigm shift is a lofty term… for an elusive concept.

Mad Men's Don Draper once said that if you don’t like what’s being said, you should change the conversation. Throwing around “paradigm shift” is a lot like that. Only it makes you sound like a Roman emperor who is plotting to overthrow an entire continent, rather than a business trying to deliver the best possible product or service to its customers.

Your colleagues and your clients can tell when you’re trying to sound puffed up or grandiose – so don’t do it. It’s hard to overstate the importance of not overstating your importance.

Here’s something interesting: According to this survey, 47% of Americans said it was better to hear office jargon and buzzwords than to see them written out.

But, according to the same study, that does not hold true for “LOL.”

When spoken aloud – such as in a pitch meeting, a social video, a podcast, or a webinar – this innocuous bit of internet speak tends to drive people up the wall.

This abbreviation – short for “laugh out loud” and pronounced either “lawl” or “el-oh-el” – was dubbed the most annoying term in industries including finance, hospitality, and technology, and was rated the slang “most likely to negatively affect perceptions of a speaker’s intelligence” by boomers, gen X-ers, and millennials alike.

It’s hard to get those three to agree to anything, right? That should tell you something – namely, to stop saying “lol,” particularly if you want your marketing content to register as helpful, rather than half-witted.

“Going with our company is a total no-brainer!”

“Working with us is a real no-brainer.”

It’s easy to see how this phrase can worm its way into your daily conversations, let alone into your marketing materials. You think it conveys confidence, experience, and that it takes the onus off of the listener. You’re making their life so easy that they won’t even have to think.

But what listeners hear is a different story. To some, it may sound reductive or dismissive. People like to think – and they like to think that their actions and opinions matter. Use your brain – and focus on adding some more inclusive language to your lexicon in the future.

In a business setting, using the phrase “internet of things” is a surefire to lose the respect of your peers, according to Summit’s survey.

While it was rated as “somewhat acceptable,” this phrase – which refers, basically, to the practice of connecting all sorts of devices to the web – can be a major turn-off.

Why? As Summit suggests, talking up connectivity using this bizarre buzzword makes a person seem like they are “trying to sound smart and tech-savvy,” rather than actually knowing their stuff.

If you’re looking to craft high quality, consistent content marketing that entertains, informs and, above all, converts, you’ve come to the right place! Drop us a line today to get the conversation started! (We promise we won’t drop any “lols” on you.)