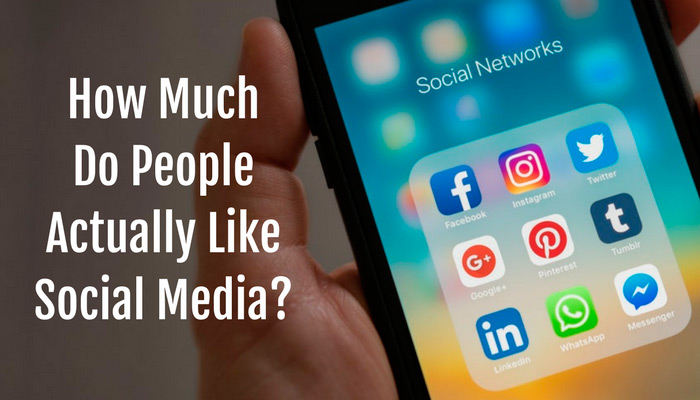 In many ways, social media has become an essential part of day-to-day life.

But do these social networks have a dark side? Increasingly, people seem to believe that the answer is "yes." And this could have major repercussions as we look ahead to the future.

If you’re anything like us, you’ve probably got at least one social tab open in your browser right this second. If not, odds are good that you’ll be using a social network at some point in the near future. After all, 68% of all American adults use Facebook regularly, according to research from Pew; among that (substantial) pool of people, 76% visit Facebook at least once per day.

We could go on. For instance, it’s worth noting that Twitter boasts nearly 330 million active users, including one particularly high profile and prolific tweeter (hint: his last name rhymes with “Rump”). Even more impressively, roughly 500 million people use Instagram every single day.

The bottom line is that seemingly everybody is on social media these days. And these social networks can certainly do a lot of good. Twitter, for example, has been vital for organizing political movements around the globe. Meanwhile, Pinterest has been a major force in grassroots ecommerce, and LinkedIn has connected countless individuals with new job prospects (and helped plenty of businesses generate hot leads).

With all that being said, though, there is a palpable feeling in the air that social media, taken as a whole, may not be all that it’s been cracked up to be.

For instance, according to one Harris Poll survey of more than 2000 American adults, a substantial number of people want social networks to go away completely (or, as the survey put it, to “kill it and hope it dies”).

According to the survey, conducted at the end of 2017 and weighted to be representative of the population at large, 46% of people wanted to do away with Twitter. 40% advocated doing away with Snapchat, and 32% yearned for the deaths of Instagram and Facebook.

And this poll isn’t alone. It’s also worth pointing to some recent research from Hubspot, which gathered sentiment data from 1000 Americans in order to determine “just feel about this big, steaming internet mess.”

Largely driven by recent revelations about political meddling and questionable ad sale practices on the part of Facebook, Twitter, and Google, Hubspot’s poll found that a staggering percentage of people distrust social media.

Across the board, Hubspot also found that people regarded entire social networks as less trustworthy as a result of the turbulence of 2016 and 2017. 42% consider Facebook to be less trustworthy overall, and 37% consider Twitter less trustworthy. In total, 77% of Americans believe that online platforms need to be more proactive and responsible when it comes to vetting ads.

And this is to say nothing of the negative PR that has afflicted social networks of late. Twitter is almost constantly under fire due to its poor reaction to hate speech and harassment. Facebook has been accused of misleading advertisers about audience sizes and permitting discrimination by targeting. More generally, reports abound that social media is addictive, contributes to feelings of isolation and loneliness, and increases stress and anxiety in users.

What Will This Mean Moving Forward?

So, with negative feelings about social media on the rise, a mountain of bad press piling up for Silicon Valley companies, and more wide ranging studies about the adverse effects of social networks getting published every year, will people actually stop using these platforms?

It remains to be seen – but, in all likelihood, all signs actually point to “no.”

Surprising? Maybe. But the numbers are there.

User data reflects this, as well. Facebook, behemoth that is, just keeps growing its audience, year to year. Even Twitter – one of the least popular and most disliked social networks – has shown signs of life recently, ending 2017 with a stock gain of 17% and an uptick in users. And, overall, digital ad spend surpassed TV ad spend for the first time ever in 2017.

What this tells us is that, even as people rage against the rise of bots, the threat of foreign interference, and the ever-present risk of “fake news,” they have no plans to abandon social media. That means that, for brands looking to reach new audiences and retain their existing ones, it will remain a vital and accessible resource, with a high ceiling for growth and a low barrier to entry.

But all of this data also tells us that it may pay to diversify your approach to digital marketing in the months and years ahead!

While the tide may be slow to turn, the reality is that there may be a day when users do begin to completely abandon social media as we know it en masse. With that risk in mind, don’t place all of your eggs in one basket! Instead, refocus on SEO, paid search engine advertising, and email, old stalwarts that may pay off big time even when interest in social drops off.

Have any more questions about the past, present, or future of social media? Looking to begin a comprehensive digital marketing campaign in the months ahead? Just want to talk shop? Whatever your needs, Geek Chicago is here and more than ready to help set you up for online success! Drop us a line today to get the conversation started!