The Emoji Revolution: How Social Media is Changing the Way We Talk Online 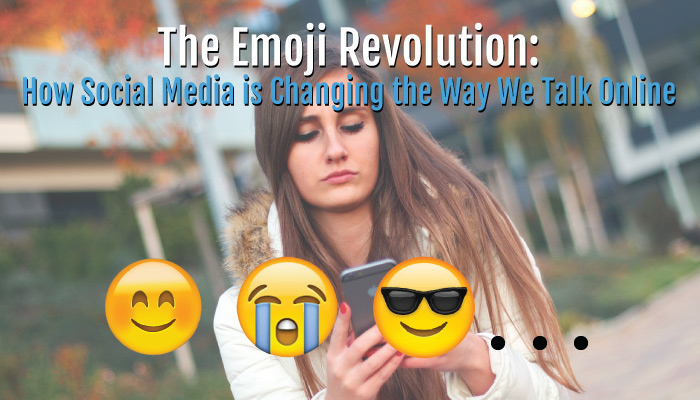 Spend even a few minutes scrolling through your Twitter timeline or checking on new Facebook posts, and one thing becomes clear: Social media has massively impacted the way we communicate in an amazingly short period of time.

Case in point? The rise of emojis, the cute little faces and symbols that are having a major cultural moment online. Just how big of a moment? Get this: “Face With Tears of Joy” emoji was Oxford Dictionary’s 2015 Word of the Year.

We’re in the middle of an amazing emoji revolution, as humble emoticons – which have existed since the 1980s – have gone mainstream, thanks to the steady rise of mobile and the explosion of social media, particularly visual-first platforms like Snapchat and Instagram. Today, little symbols are big business: 6 billion emojis are sent every single day, and 74% of people in the U.S. use emoticons, stickers, or emojis in their regular online communication.

So what’s behind the emoji boom – and what lessons can marketers take away from the adorable little symbols? With our thanks to this great post over on the Buffer blog, here’s what you need to know about how social media is changing the way we talk – and market our brands – online:

In emails, texts, comments, and tweets, emojis have become a way for users to actually replace common words and online slang, as was recently proven by this comprehensive Instagram study.

According to the study, emojis carry the same weight and meaning as popular online words and slang: A “Face With Tears of Joy” may communicate the same thing as “lol” or “haha” or “lmfao,” for instance, while a “Thumbs Up” emoji may convey “good job,” “keep it up,” or “awesome.”

In short, we are using emoji symbols to convey the same amount of meaning in fewer characters than ever.

The Lesson for Marketers?

More than ever, we’re typing quickly on smartphones or shooting off social messages between bouts of work. Users want to communicate with each other faster and more efficiently, using not just emojis, but abbreviations, neologisms, and slang, as well.

Marketers should speak their audience’s language to communicate with them, rather than above them. Now, there is a right way and a wrong way to do this; for the wrong way, check out the incredible “Brands Saying Bae” Twitter account. For the right way, look to Domino’s pizza emoji campaign, which lets customers order their favorite pizza by simply texting or tweeting an emoji.

As the Domino’s campaign suggests, if you simplify the customer experience, you will increase brand engagement, loyalty, and interaction - all thanks to one little cartoon character!

When humans interact face-to-face, we rely on physical contextual clues. In fact, only about 7% of communication is verbal (that is, what we say) – the rest is determined by tone (how we say things) and nonverbal action (what we’re doing while we say things).

Emojis act as a quick way to communicate tone and context alongside our written text, allowing us to, as the Buffer blog puts it, “write at the speed of talking.” That is, we can include a crying emoji alongside our text to communicate sadness, or a laughing emoji to show happiness or joy. Or, conversely, we can include an emoji that juxtaposes with our text, showing that we’re being ironic or jokey. The possibilities are, basically, limitless – and surprisingly sophisticated. After all, who knows the full potential of the “poop” emoji?

In many ways, we use hashtags similarly, as a concise way to communicate tangential ideas that help clarify, deepen, or contextualize our text.

The Lesson for Marketers?

Emojis and hashtags are a great way to heighten your brand’s emotional appeal – and that’s great news, since brands who connect on an emotional level will see twice as much impact as those who don’t.

We see this again and again across social media and content marketing: Connecting emotionally is an effective way to increase your shares, engagement, and clicks.

Want to know more about the dictionary of emojis at your disposal? Curious about how to put the new language of social media to work for your brand? That’s where we come in! Drop Geek a line for all of your digital marketing, development, and reputation management needs. Our experienced team is here and always ready to help get your business on track!