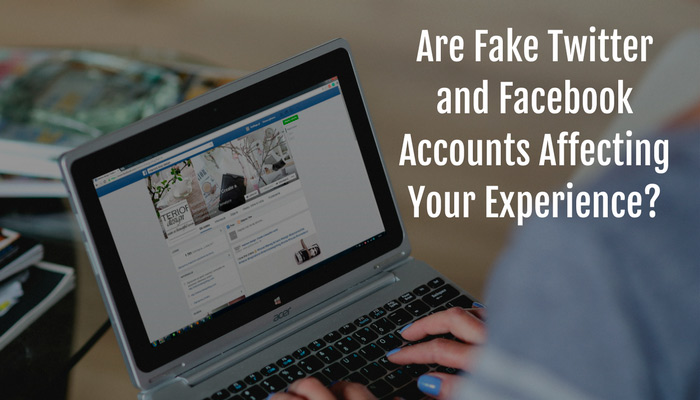 Social media’s foundational value is right there in its name. “Social.”

It’s a word that we use all the time, but it has some heavy connotations, when you really think about it. It suggests person-to-person connection. It suggests real engagement. It suggests authenticity.

So… where has all of that gone on social media?

Will All the Real Accounts Please Stand Up?

“Fake News” was one of the biggest buzzwords of 2016 and 2017. Fake social accounts and fabricated web content, disseminated across social media, may well have played a large part in influencing the outcome of an American presidential election.

But it goes beyond that. In testimonies before Congress, representatives for Facebook and Twitter both estimated that a significant portion of the accounts registered on their networks are fake. Facebook estimates that as many as 60 million accounts – that’s 2-3% of the company’s 2 billion regular visitors – are fakes. Twitter estimates that 5% of its 330 million users are “false accounts or spam,” which equates to 16 million profiles.

To make matters worse, independent experts warn that these social networking behemoths are likely massaging their numbers, and that the real numbers are far higher.

As we move into 2018, there is little evidence that the social media channels that we increasingly rely on for news, entertainment, business, and personal correspondence are doing anything to combat the scourge of fake and duplicate accounts, automated bots, and spammy links.

Though both Twitter and Facebook have repeatedly made promises to look into and remedy these issues, experts warn that the actions they’re taking may be too limited – and that any processes that are put into effect will be internal, and left largely without oversight.

As Jonathan L. Zittrain, who studies the internet and society at Harvard, explained to the New York Times:

“These platforms are oriented to maximize user growth and retention… That means not throwing up even tiny hurdles along the sign-up runway, and not closing accounts without significant cause. I suspect they figure there are enough accounts that are the subject of complaints to review without looking for more to assess.”

According to that same Times report, stories abound of real social media users flagging or reporting fake content or bogus accounts to the network – only to receive a canned response that offered little more than “a standard message of thanks for the feedback but said the profiles did not violate its community standards.”

After all, as Zittrain points out in the Times, the business model of social media is built on signing up more and more people. In fact, there is evidence that Facebook itself has deliberately misled businesses about its platform’s capacity for reaching audiences; in 2017, for instance, the company came under fire for claiming that its advertising could reach more people “than actually exist in the U.S.” according to census data, Bloomberg reports.

It beggars the question: Doesn’t this cheapen the experience of marketing on Facebook? Why pay to promote your content to accounts that don’t really exist?

And why continue to get on Facebook or Twitter as a casual user if you suspect that you’ll be targeted by brands, individuals, and content that is misleading (at best) and dangerous (at worst)?

It’s worth pointing out, too, that Facebook and Twitter aren’t the only tech companies complicit in this. As that Times story points out, many of these fake social accounts and spambots are designed to direct traffic to third-party clickbait sites that are loaded with Google ads, which generate revenue and which serve to highlight “Google’s foundational role in the ecosystem of online deception.”

One expert, author Zachary Elwood, tells us over email that, recently, "Google has cracked down on a lot of fake sites, booting a lot of people out of their ad network" and forcing them to "straighten up their sites/news a little bit so as not to be flagged by Google, or use other ad networks."

So, to sum it up, consumers currently have little choice but to work within an online “ecosystem” that currently permits – and, perhaps, even needs - these fake accounts to flourish, even as they pollute the experience of actually using the internet and put real consumers at risk of identity theft and exposure to disinformation.

What Can a Real Person Do?

One last spot of bad news? While many of these accounts are still obviously fake, some insiders warn that spotting a bot or malicious fake profile is getting more difficult by the day.

“Spammers and bad actors are getting better at making themselves look more real.”

So, what can you do as a concerned citizen of the internet? How can you make sure that social media remains open, useful, and truly, authentically social for years to come?

One way to start is to arm yourself with information. The best defense against fake accounts – and the misleading information, shoddy links, and questionable connections they bring – is to know how to spot them in the wild.

On both Facebook and Twitter, pay attention to the language that the account is using. Does it seem stilted? Is the grammar particularly poor? This could be a sign that you’re dealing with a foreign actor (or machine) impersonating English speech.

From there, take a look at a few key profile elements. On Facebook, check out the account’s friend list – are they all foreign, even though the “person” claims to be American? Next, compare the person’s public name to the URL that directs to their profile, as there could be a discrepancy. Finally, search Facebook for that person’s name. Do other pages appear to host the same pictures or fall back on similar details or identifying information? You almost  certainly have a  fake account.

On Twitter, look out for identifiers, since a fake account probably won’t have them – or at least, they’ll seem inauthentic. Is the profile picture unclear, or of a cartoon (or of just a lower body, or a far-off shot of a scantily clad woman)? Does the account seem to be posting the same message or reply multiple times a day, at all hours of the day and night? Does their Twitter handle have a string of numbers attached to the end, seemingly for no reason? Is their ratio of “followers” to “following” way out of whack? All of these are tell-tale signs of a shady account.

Best plan of attack? When you see a bot or spam account in the wild, report it, block it, and avoid “feeding the trolls.” Cull your follower list of obviously fake accounts, and don’t follow any links that seem questionable. When in doubt, just report and move on.

Until the powers that be decide to seriously focus on the experience of their real users, instead of their bottom lines, there’s not much else to do. And, as Elwood pointed out in his conversation with us, these sites "are doing themselves a disservice, too, because... smart people will be less likely to want to use their services if they feel they often have to wade through a bunch of bullshit and spam and liars."

So, good luck out there – and don’t let the bad bots bite!

Have any more questions about navigating the social media world today? Curious about how you can extract real value for your brand online – while staying safe? Geek is here to help! Drop us a line today to get the conversation started!