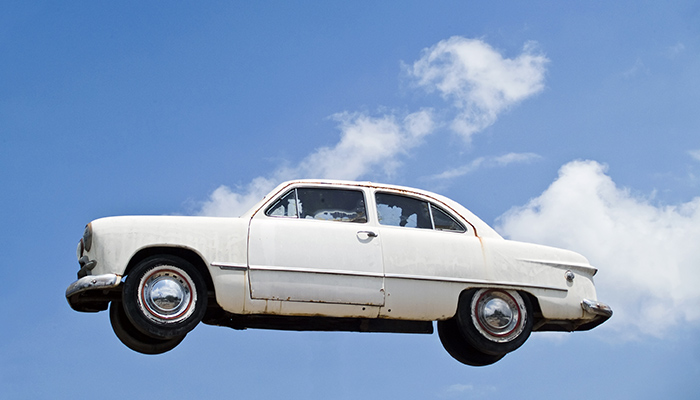 Happy Fourth of July! This day – full of food, family, and fireworks – always makes us think about independence, and what that really means.

Yep. It’s true. That Jetsons future you always dreamed about may be closer than you ever thought it could be, thanks to some recent innovations from some of tech’s biggest players. We thought it would be fun to take some time today to run down what may or may not be in store when it comes to liberating us from the tyranny of wheels and traffic lights.

Here are three big flying car movements to watch in the years ahead:

Uber is a company that has always looked toward disrupting the future – even though it can never seem to free itself of some pretty troubling disruptions here in the present. Whatever opinion you hold about the current king of the ride-sharing sector, it’s hard to deny that Uber is consistently looking forward at some pretty monumental ideas, whether that means self-driving cars, or, yep, flying vehicles.

Uber has been telegraphing its intentions in the aviation field for some time now, releasing an extensive white paper on the topic last year, and bringing a prominent NASA engineer into the fold this year. And, a few months ago, Uber laid out the full scope of its ambitious plans, announcing its intentions to create a network of flying taxis in Dubai and the Dallas area by 2020.

You read that right. How does Uber plan to achieve a project of this magnitude in such a tight timeframe? Part of it comes from the tech; Uber is currently working toward a vertical takeoff and landing (VTOL) aircraft that will use small landing pads, called “vertiports.” The company sees this method of transportation as more economical, even, than driving, claiming that it will be able to get the cost for a trip in an Uber flying taxi “down to an ambitious $1.32 per passenger mile,” according to the Washington Post.

Named after the site where the Wright Brothers famously first took to the sky, Kitty Hawk promises to take aviation one step further than that innovative family ever could.

The company’s current prototype, which was recently unveiled in a splashy test flight, looks a bit like a hang-glider; it’s an open-seat vehicle with room for just one, powered by eight propellers. Kitty Hawk promises that the final model will look a little sleeker and operate far more quietly, and, most importantly, they anticipate that they’ll be able to begin selling them commercially by the end of the year.

It’s clear that Kitty Hawk – which is led by Larry Page, a Google founder, and Sebastian Thrun, a leading technologist and self-driving car advocate – is trying to beat its competitors to the market for individual flights, even as it continues to examine the possibility of the flying taxis that are more in line with Uber’s vision of the future.

The drawback? As a writer over at Business Insider points out, the current Kitty Hawk model that we’ve seen… isn’t really a flying car at all. Instead, it operates more like a drone or a pontoon boat. It’s an impressive achievement – but not something that’s really earthshaking quite yet.

Unlike Uber or the upstarts at Kitty Hawk, Airbus is a well-established aerospace firm, based out of Blagnac, France. That means that is has, perhaps, more of a chance of getting its loftiest flying car concepts off the ground.

The one particularly worth noting? At this year’s Geneva International Motor Show, Airbus unveiled the concept for Pop.Up, an autonomous vehicle that will be able to seamlessly operate both on the ground and in the air. When on the ground, the Pop.Up drives more or less like a normal car, by means of an electric ground module with four conventional wheels. To take to the skies, the operator only needs to summon an air module – essentially an oversized drone – which then clips to the central pod, allowing for liftoff and travel up to 60 miles.

Of course, with all of these high concept ideas for maximizing our use of the sky, there are still plenty of ideas to be ironed out, ranging from storage to energy sourcing to, most importantly, regulations from groups like the FAA. But with more than a dozen companies currently experimenting with some sort of aircraft, it’s clear that the innovations are just going to keep coming.

What do you think? Are you excited or nervous to take to the sky like a July Fourth firework? Feel free to sound off on Facebook or Twitter, where we keep the geek speak going 24/7.