Gadget of the Week – Nerf Rival 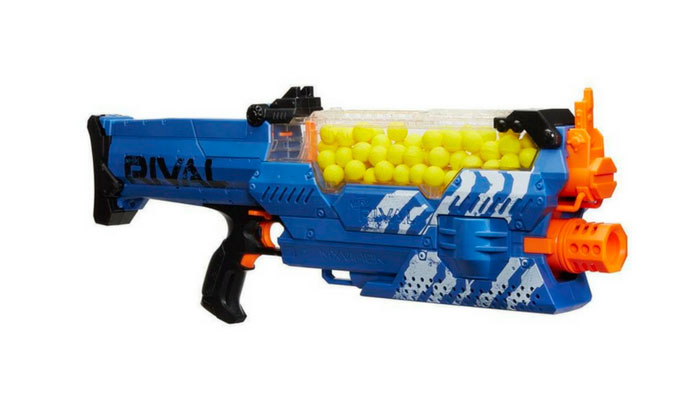 There have always been a few unwritten rules to childhood that every kid understands intuitively. For instance? Kissing is gross, paper fortune tellers are always 100% accurate, and Nerf toys are the absolute greatest.

Of course, a bunch of adults would also probably argue in favor of that last point, too – including your local group of Geeks!

Nerf blasters, and their trademark foam projectiles, are a great way to pass the time, whether you’re playing with your family or trying to get motivated at the office.

And one of the newest iterations of this classic Hasbro toy, dubbed the Nerf Rival, is the coolest addition to the franchise in many years. And you don’t have to take our word for it; Popular Mechanics calls one Rival toy “freakishly fun,” while CNET fondly dubs the Rival blaster “a foam-ball menace.”

Allowing for “precision battling,” the Nerf Rival line – which includes such blasters as the Nemesis, the Artemis, the Atlas, and the KHAOS – swaps out the conventional foam and rubber darts for small, colorful balls, bringing the overall level of play (and the intensity) closer to paintball than conventional “foam warfare.”

Across the board, Nerf Rival blasters feature higher capacity chambers for longer, more continuous battles; the balls are also significantly easier to add into your magazine than their skinnier counterparts, allowing for quicker load times. And while the conventional “pump and shoot” method is still in play for some Rival blasters, others, including the Nemesis and the KHAOS, allow for gravity-assisted auto-blasting, making them a real force to be reckoned with.

And don’t worry about “shooting your eye out;” the Nerf Rival line comes with safety masks to keep your whole face safe.

With that said, the Rival toy line is definitely not for young kids; the velocity of the projectiles and the size of the blasters make this line a better fit for teens and adults looking to recapture a little of that Nerf magic.

Looking to find a cathartic new way to solve inter-office squabbles? You can give the Nerf Rival line a go right now; blaster models range from $40 to $100 and are available at various retailers, with additional accessories – including replacement rounds and battery packs – sold separately.

Have any other nostalgic gems you think our team would love? Let us know on Facebook or Twitter. We're always looking for the latest and greatest in gadgets and apps to feature here on our blog!