Gadget of the Week – PancakeBot 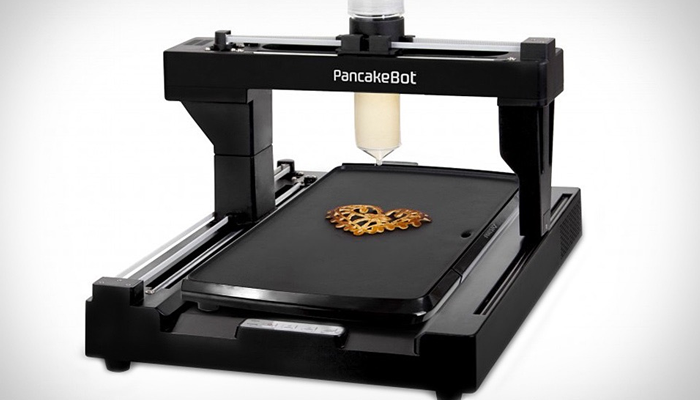 3D printers have manifested themselves in to a tasty mechanism with PancakeBot. Yes, this printer can, in fact, make pancakes out of any shape that you draw: A flower, a self-portrait, the Geek | Chicago logo... anything.

This magical and delicious device syncs with a tracing software which works with Windows and Macs. Simply draw the pancake design, save it onto a memory card, put this care into the PancakeBot, and let the pancake production begin. (If you aren't as artistically savvy, you can also upload an image and then trace over the lines to help you draw. There is no Pancake plagiarism police that we know of.)

The PancakeBot scans the design and uses batter as ink to draw the pancake. If you want a little extra pizazz, you can add food coloring to the batter. And yes, you can add shading to the pancake by retracing certain parts of the image. The lines of batter you create first will come out darker, so you have to use a little backwards thinking in your design.

Alas, you have to flip the pancake yourself. But really, isn't this a little price to pay for your pancake baking friend?

PancakeBot was originally created by Miguel Valenzuela, crowdfunded via Kickstarter with a goal of $50,000 (which has been well surpassed.) We're expecting the PancakeBot to cost somewhere around $300 when it is revealed to the public in July, though you can purchase one through Kickstarter for around $179 currently.

Click here or on the image to learn more about PancakeBot