The Google Algorithms of 2014 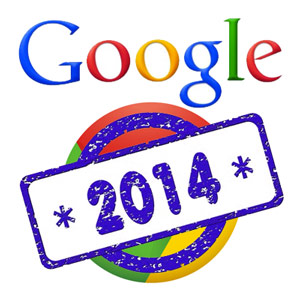 Another year has come and gone, as inbound marketers everywhere take this opportunity to look back on where Google has taken us this past year.

We're certainly used to ever-shifting algorithms, looking as far back as the 90s to map out the meandering journey of Google's search engine capabilities. 2014, however, was a year that brought the web some pretty significant changes in of itself.

We started off the year with a Google algorithm change in February, where a new Page Layout algorithm - known as "Top Heavy" - which was manufactured to ding sites with too many ads above the fold.

This was the first step in the year made strictly to improve user experience, and aimed to give users the content they want right after they click a search result.

A major Panda 4.0 update occurred in May, specifically aimed to help small business and websites with quality content to perform better in search results.

May also brought a 2.0 update to the Payday Loan function, though the specific details of this update were a little hazy. It seemed to penalize specific "spammy" or spam-heavy sites.

3.0 unveiled in June, which made a significant adaptation to the anti-spam algorithm and targeting spammy queries more generally (as compared to 2.0.)

Remember seeing photos and authorship annotations next to some of your searches? Well, Google officially plucked out authorship photos in June, stating that the change de-cluttered search engine results, especially for mobile users.

Later in August, Authorship was removed altogether, removing the relevance of the "rel=author" tag data. Why was it removed? Apparently there was low publisher and webmaster adoption. (Learn more about the death of Authorship here.)

This was perhaps the biggest change of the year, helping local businesses climb traditional web searches by improved distance and location ranking parameters.

HTTPS/SSL as a Ranking Signal

Google determines organic search page rankings through about 200 ranking signals, and in August added  secure sites to this list as part of a broader effort to make the internet a more safe place. This is a pretty minor change in the gramd scheme of things, but perhaps a statement about where Google is headed?

The 27th Panda update came in September, heightening the search filter to be more precise with what is low quality content, thereby allowing more medium-sized sites with high quality content a better ability to compete. This is an area in which we, Geek | Chicago, love to play.

In October, Google made another effort to fight digital media piracy by improving Pirate with heightened ability to ding sites with copyright infringement reports. This update evidently targeted a small group of suspect websites (and dropped their respective rankings significantly).

While this update really only affected less than 1% of English queries, it did help boost search engine ranking for websites who have cleaned up webspam discovered in the previous Penguin update. This update also dinged sites with newly found spam.

Were you affected by any of these updates? We'd love to hear your thoughts. Drop a comment or send us an email!