Gadget of the Week – GoPro HERO 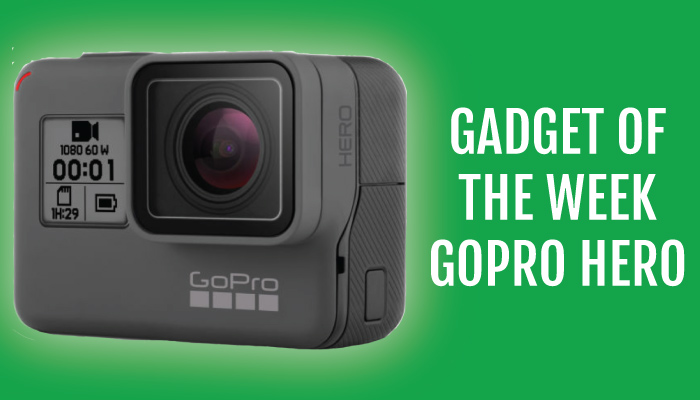 Have you ever seen footage of someone parachuting headfirst from a helicopter – shot from that person’s adrenaline-pumping point of view? Or how about an amazing shot of a concert – from the perspective of the guitar, or even from a set of whirling drumsticks?

Odds are, if you’ve ever seen a piece of awe-inspiring first-person video that left you asking how they did that, then that footage was shot on a GoPro camera.

If you want to get started shooting incredible videos of your own, you could do a lot worse than GoPro’s latest, the GoPro HERO.

This “entry-level” camera packs a ton of power into a small, affordable piece of hardware, perfect for “newcomers” – and anyone looking to make quick, powerful videos without a ton of set-up.

For a starting price of $199 (or possibly less, depending on where you shop), the GoPro HERO boasts a max resolution and frame rate of 1440 pixels at 60 frames per second. It also has the capacity to take 10-megapixel photos, with a 10 fps burst shooting option.

While these specs aren’t up to the standards of some of GoPro’s more higher-end models – which offer functionality to shoot in 4K and super slo-mo – they’re still remarkable, and beyond competitive for the price point.

And for the gearheads out there, the Hero is a durable and impressive little unit. It comes complete with a 2-inch touchscreen, voice control capability, digital video stabilization, and even comes waterproof to depths of 30 feet. The HERO is also essentially the same size and shape as its more expensive counterparts, meaning that it’s generally compatible with existing GoPro accessories, including mounts, shooting sticks, tripods, and memory cards, as well as the company’s own suite of handy smartphone apps.

Ready to take stunning videos and powerful pictures – without having to break the bank or spend hours learning a complicated new set-up? You can purchase a GoPro HERO for $199 (or less) from GoPro, or from various retailers – including Target and Amazon.

Think there are any other photography or design tools our team should get our hands on? Is there a “next big thing” that we need to know about? Let us know by dropping us a line on Facebook or Twitter, where we keep the geek-speak going 24/7. You may even see your idea featured on a future blog post!