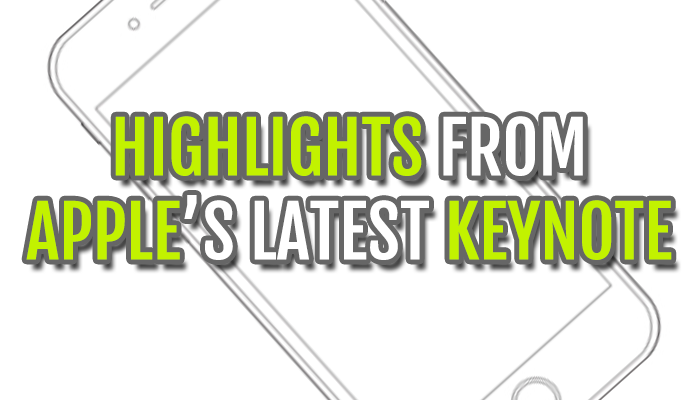 This week, Apple broadcast its new offerings to consumers worldwide, showing refreshing changes to the Mac family and updates worth looking into. Here are some highlights:

We were correct in predicting many of the iPhone 6s and 6s Plus upgrades and improvements, which are exciting game-changers for Apple followers!

3D Touch is probably the most talked-about new feature, and it’s one that will change the way users are going to interact with their phones. This beefed up version of Force Touch adds an extra dimension to the iPhone screen.

This will allow folks looking through emails to either “peek” at the email by lightly tapping it or “pop” open the email by pressing harder, a dynamic that carries through the camera: Tap lightly on the camera icon to get to the photo options screen, and press harder to pull up selfie mode.

Speaking of cameras, the iPhone 6s and 6s Plus challenge the smartphone photo game with a 12MP camera that can shoot 4K video, which uses 8 million pixels/frame. FaceTime will come in 5MP, while the device itself will offer the Retina Flash its devotees expect and love.

Customers can expect these new iPhones to drop on 9/25, and, now, can enroll in the Apple Upgrade Plan, which starts at $32/month and provides the ability to upgrade to an iPhone every year.

There’s a reason Tim Cook called this “the biggest news for the iPad since the iPad.”

Perhaps the most anticipated device in the bunch, the iPad Pro offers an even more polished and complete interface. With a 12.9” screen that measures 2732x2048, users will get a real sense of split, full-screen multitasking, which will make running side-by-side iPad Air apps a possibility.

Many compare this with the 12-inch Retina MacBook, but we do want to point out that one works with OS X while the other is iOS. The cellular models also come with LTE.

The iPad Pro comes with the different odds and ends users want, but these features will be just a bit more useful. Of course, there are two speakers at the top and two at the bottom, a lightning port, headphone jack, side buttons, Bluetooth, and wifi capabilities, along with front and rear cameras.

The device will launch in November and begins at $799 for a 32GB tablet.

The Apple Watch is all about style upgrades this go around. The Sport model will come with new plastic bands in a larger variety of colors, while the Apple Watch Hermes unites high-end fashion with tech by offering leather bands and exclusive watch faces.

Mac’s newest OS X, El Capitan, will come out on September 30th. Macworld offers a list of the top 10 features to look out for with this new OS.

With these in mind, we think it’s going to be a great autumn for Apple fans and look forward to engaging with the new devices as they drop. To stay updated on Apple’s latest, follow our newsletter!