How Chance the Rapper Became a One-Man Digital Marketing Machine 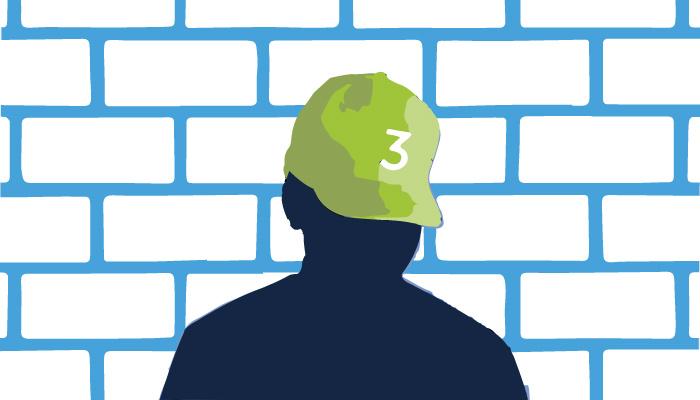 He was named Chicagoan of the Year. He’s won a Grammy without ever selling a physical copy of his album. He’s encouraging young people to create art and go into politics. He’s starring in an upcoming horror adventure movie.

He’s Chancellor Bennett – that’s Chance the Rapper to you and me – and he’s a one man media mogul, single-handedly revolutionizing not just what music sounds like, but the ways in which we access and enjoy it in our digital world. On the side, he’s also a fashion icon, a renaissance man, and Chicago’s favorite son.

One last thing? He’s also a one-man digital marketing machine, putting content marketing, branding, and social media to work to find the sorts of success that plenty in our industry only ever dream about.

So, what makes Chance - acid rapper, soccer, hacky sacker, cocky khaki jacket jacker - stand out in the field of digital marketing, even among celebrities? Well…

He Knows the Importance of Branding

Branding is key for businesses of all shapes and sizes. Whether you’re a giant multinational corporation, an independent contractor, or, yes, a twenty something rap wunderkind, it’s important that you have a distinct narrative and visual sensibility that helps set you apart from the rest of the pack.

Now, it’s important to stop for a second and recognize that branding means a lot of things to a lot of people. To keep it simple and practical, the Geek team generally approaches the principles of branding as two-fold, and we work with our clients on both aspects. The first element to having a brand is to have a completely unique visual style, complete with a logo, a color palette, a preferred font; whatever constitutes the “look” of your business, that’s visual branding. The second component of successful branding is to have a unique and compelling brand narrative or story; your narrative is the “who,” “what,” and “why” of your business. You create your story through the content that you create and share, be in on your website, your email marketing, and, in particular for Chance, on social media.

Now, let’s turn the spotlight back on Chance, since the way that he uses branding tools to promote himself and share his work online is nothing short of amazing.

Take the number “3,” for example: For millions of people around the world, for example, “3” will always be synonymous with Chance – and that’s all because of branding. Not only is the 3 his instantly-recognizable logo – bedecking everything from hats to posters to album covers – but it’s also a key part of his brand story; his most recent mixtape, Coloring Book, is his third record, and Chance has explicitly called out the number in song, most famously in a verse on Kanye West’s "Ultralight Beam:"

That’s how you create a brand! Chance has cultivated a symbol (the number 3), which he then uses to connect himself to the past and his influences (Kanye), all while looking forward to his successful future (that Grammy).

We could just as easily pointed out how Chance has frequently adopted the persona of Arthur the Anteater in song and online; how he used the Chicago White Sox logo as inspiration for his band The Social Experiment; how his Twitter name (Little Chano From 79th) came directly from a song lyric; how he’s rocked his signature overalls at concerts and on the red carpet; or how he has turned the central images of his Coloring Book into a festival, an immersive art installation, and more.

An iconic visual style and a memorable personal story? When it comes to branding for this Rapper, nothing gets left to chance.

He Uses Every Aspect of Social Media

“God give me one sentence more
Maybe I just gotta get suspended more?
Hashtag it, get mentions for it
Make you love it, get it trending more
And then act humble…”

Besides the fact that he made it so free and the bars so hard that there wasn’t one gosh darn part we couldn’t tweet (we’re paraphrasing), Chance uses social media efficiently and effectively, putting every aspect of every platform to work in its own way to increase his following, share his brand messaging, and engage with his audience.

Engaging with Fans
While so many big corporate brands use social media purely to churn out content and crank out promotions, Chance is a one-man brand, and that’s his secret weapon – he uses social media like a real person. It’s hard to stress how important that is to your marketing success, but if you need some proof, just look at Chano’s astonishing reach; it all comes down to the fact that he’s accessible, relatable, an avid listener, and most importantly, really fun to follow and talk to online:

Connecting with Influencers
In addition to interacting with his friends and followers, Chance also uses his influential connections to even further expand the reach of his music and messaging. That takes on a few forms, including powerful connections with big companies like Apple Music, as well as collaborations with a diverse roster of artists, from Donald Glover to Lin Manuel Miranda.

At the same time, Chance also lends his voice to some artists, groups, and brands who could benefit from a boost, including up-and-comers like Noname, a Chicago legend in her own right, as well as Chicago Public Schools, which Chance has become a vocal supporter for in recent months.

Running Contests and Promotions
In addition to renting out an entire theater so that some lucky followers could see Get Out for free, Chance has become a master at using Twitter as a tool for running contests, promotions, and giveaways: He’s put the platform to work advertising secret shows, and he stirred up a ton of positive PR recently when he used Twitter to promote and hand out tickets to some high profile events, dubbed Magnificent Coloring World 1 and 2. 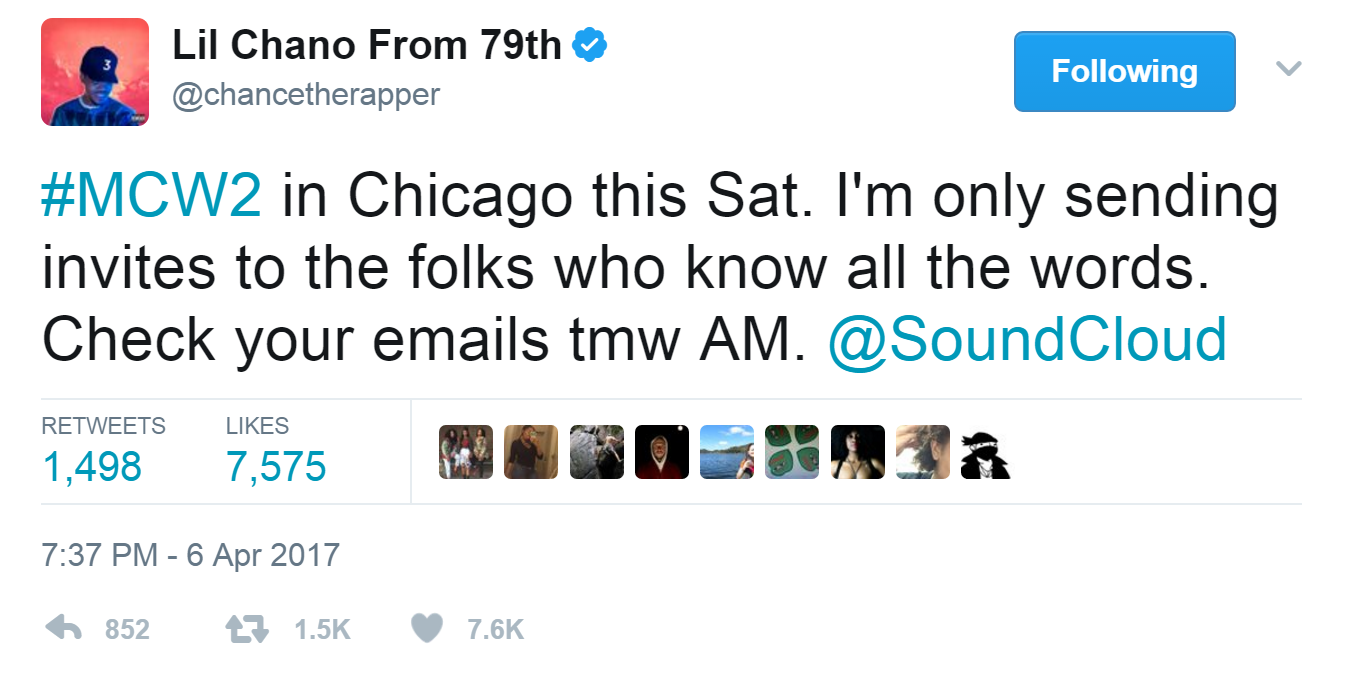 Using Diverse Content
Remember when we mentioned how vocal Chance has been for securing funding for CPS? While that’s incredibly noble in and of itself, it also caught our eye for a slightly different reason. You see, when he held a press conference not too long ago to state his position and lean on Bruce Rauner, Chance didn’t just go on TV; instead, he increased his reach by live-streaming the meeting on Facebook Live and Periscope.

And live video isn’t the only type of content Chance is putting to work on social media: He’s also shared plenty of written pieces and blog posts, high quality photos and graphics, and tons of user-generated content, like fan art and videos.

So when Lil Chano sings about how blessings keep falling in his lap, he’s being too modest. Sure, good things are happening to him, and he deserves them. But it’s also important to remember that Chance is working hard for those blessings, putting his unique and powerful digital marketing machine to work spreading the love, sharing the positive vibes, and passing along the music every single day.

Want to keep the conversation going – about music, design, social media, or any combination of the three? We’d love to hear from you! Don’t hesitate to drop us a line or reach out on Facebook or Twitter, where we keep the geek love going 24/7.