You Won’t Believe the HUGE Changes Coming to Twitter 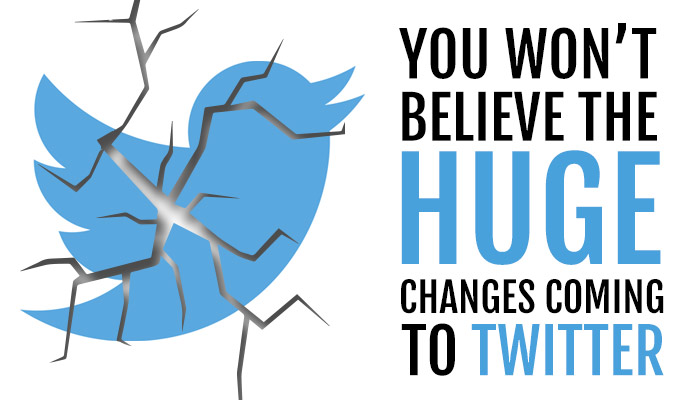 Hey, Geeks! We’ve got a major scoop about Twitter you’re not going to read anywhere else!

Faced with somewhat stagnant audience growth and major pressure from investors, Twitter CEO Jack Dorsey – who took on the position late in 2015 – just made a huge announcement. Starting next week, Twitter will begin publishing a print newspaper every single day. Rather than just focusing on microblogging, the platform will now be shifting into paper printing and snail-mail delivery.

“That’s the future of the tech industry,” Dorsey said in a statement. “People want to be able to read the news at their own pace and get newsprint on their hands. More than GIFs or algorithms, we think printing is the future of the industry.”

Did we get you? Sorry, we couldn't resist having a little fun!

And, considering all of the major changes that have come to Twitter since Dorsey’s rise, would this news really have surprised you that much? The platform – long a favorite for journalists, PR professionals, and social media marketers – has been grappling with its identity lately, rolling out some universally loved updates and making some controversial overhauls at the same time.

Let’s look at four changes that really have come to Twitter lately, and what they may mean for the company:

Launched just after Dorsey’s takeover, Moments actually is designed to make Twitter work more like a conventional news site, automatically compiling tweets about major events into one accessible section. That way, the top headlines, viral happenings, and huge events of the moment can be viewed in real time, without you having to search or cull through tons of noise to get to the content you really want. Moments has met with mixed reviews since its launch, although a recent update to improve its use on mobile browsing may force us to take a second look at the feature.

Hard-G or soft-G? However you say it, users celebrated the release of a massive, searchable library of GIFs in February with the hashtag “#GIFparty.” While Twitter has supported embedding GIFs for some time, this new feature makes it unbelievably easy: Just click the GIF button, search for what you’re looking for, and add it to your tweet.

If Moments failed to make a stir and the GIF functionality was a huge hit, then the algorithmic timeline could safely be called a bit of a disaster for Twitter, derided by many power users before, during, and after its launch. Designed to promote tweets based on popularity and relevance, rather than just chronological order, the algorithm was supposed to appeal to casual users who just wanted the best of their timeline to always be at the top.

For those who prefer their Twitter chronological (including this Geek), you can still access your timeline in third party apps like Hootsuite or Tweetdeck, or opt out of the algorithm by going to “Settings” and then unchecking the “Show Me the Best Tweets First” box.

From 140 characters to… 10,000? It seems like a crazy leap, but it’s an idea that was seriously being kicked around earlier this year, according to a report from Re/Code that made major waves online. While there isn’t a firm launch date set in stone – and we don’t really know yet what the feature may look like – this would be huge for the platform.

As Re/Code puts it, this “willingness to change one of Twitter’s most established product features” – and a fundamental part of its identity – highlights that Dorsey and his team “are willing to make serious changes in hopes of luring new users.”

With all of that in mind, our little April Fool’s prank doesn’t seem so far-fetched anymore, does it?

If you need help staying on top of the platform’s technical changes, or you’re just looking for a guide to help you dive into the ever-changing world of social media marketing, Geek is here to help! Drop us a line for all of your content creation, design, and marketing needs. And, hey – why not follow us on Twitter while you’re at it? We promise to give you all of the cool tech and digital marketing news you need - and fewer terrible April Fool's jokes.