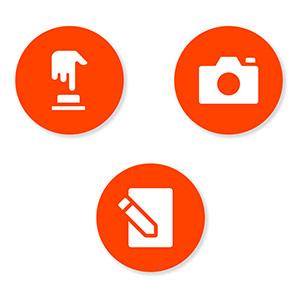 You may already know a bit about our long-time obsession with the IFTTT app - an app which allows you to personalize your internet experience with "If This, Then That" formulas. IFTTT interacts with 79 different channels (like Facebook, Instagram, your email inbox, etc.) to create cause and effect based actions and reactions of your choosing:

IF the forecast shows rain on the Weather app, THEN send me a text message
IF I upload a photo to Instagram, THEN upload the photo to Dropbox as well
IF it is the 25th of the month, THEN send me a reminder to pay rent

We thought the options with IFTTT had been exhauted... until IFTTT released Do.

Do enables you to take action with the tap of a button, with a suite of apps to simplify recipes into customizable shortcuts. The Do apps - Do Button, Do Camera, Do Note - are designed to simplify the IFTTT process by letting users drag and drop desired tools to create specific buttons for specific actions. Here's the scoop.

Do Button is used for connecting Web tools together to create a shortcut on your home screen. You can use this app to create a button that is dedicated to, say, turning your lights on and off, or logs your location into a Google Drive spreadsheet.

So far, you can only program up to 3 recipes, but we should see some easier swapping functionality in the future.

Do Camera allows users to specifically link the photo functionality on their phone to another application. Maybe you want to save your photos automatically to Dropbox every time you snap one, or automatically upload to Facebook.

Do Note lets users type any specific command to add a Google Calendar or Tweet. Do Note is also handily linked to voice commands, so you can create a specific word or phrase to trigger a Do Note recipe.

It is also important to note that, in addition to launching Do, IFTTT is rebranding its name to IF for short.

In a recent interview with TheNextWeb, IFTTT CEO Linden Tibbets stated that, for the moment, they are focusing on sticking to devices that everyone owns (smartphones, laptops) before moving onto other concepts (i.e. wearables):

“We’re focusing on the concept itself right now,” Tibbets says. “But if we can get people used to creating customized buttons on their phones, we’re hoping they will soon want Do buttons for all their devices – cars, nightstand lamp and every other Internet of Things devices.”

Either way, we're loving the increased productivity push from IFTTT and are looking forward for more gems to come.