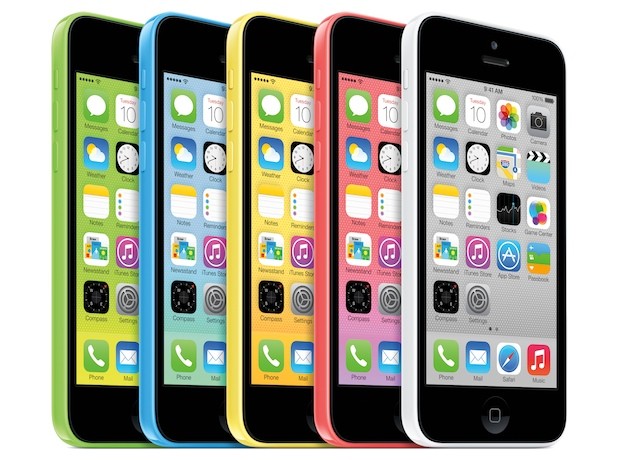 Both phones will feature the iOS 7 operating system that was showcased 3 months back. This new operating system, offering more in the way of visual changes than functional ones, will also be available for download by owners of other near-generation iPhones. For the most part, we'll focus on the advances (though there are not many) of the 5s, as Apple's flagship device.

In many ways Apple is simply playing catch up with its competitors, namely the Android handset manufacturers like HTC, Samsung, and (Google-owned) Motorola.

The fingerprint sensor was an eagerly anticipated feature, and they did perform. Apple used TouchID's finger print sensor technology to allow iPhone users to unlock their phone with their fingerprint, and authenticate other services (like iTunes purchases).

This is the one truly innovating feature of the new model. Certainly we've seen fingerprint technology for years, and we know it isn't foolproof, but this is the first we've seen it on a mobile phone. Well... actually, this is the first time we've seen it work properly on a mobile phone. The Motorola Atrix 4G implemented this technology back in 2011 with mixed to poor results. We give Apple the benefit of the doubt, seemingly having done it right on their new device. It should represent a huge leap forward in security for the average user.

The PIN unlock code, popular (but not popular enough!) on prior models of iPhone and on Apple's competitors (like Android) were a good start, but far from ideal. A longer alphanumeric password is far more secure, but a hassle for most casual users that prevented them from using it. Android also showcased a Facial Recognition unlock feature about a year ago, prevalent on most current Android handsets, but almost never used. It is unpredictable in mixed light situations, and ultimately can be fairly easily spoofed. According to a 2011-2012 survey by security firm Sophos, only about 30% of cell phone users protect their phone with some sort of password - so if this makes it easier, we're all for it!

The phone does feature a 64-bit processor, and iOS 7 will be a 64-bit architecture - two distinctions lost on many of their loyal patrons and likely buyers - but this is a big step forward for the Apple phone. The exact impact on performance and stability is yet to be measured, but rest assured, it will be an improvement. How it will stack up against the dual-core and quad-core processors of its competitors also remains to be seen.

Apple added their iWork productivity suite to new iPhones for free... just like Polaris Office on Samsung devices. There are a number of good Android office suites available for download as well, some of them free.

The new iPhone's screen is the same 4" Retina display we saw in the iPhone 5. This will disappoint many fans who were looking for a bigger screen the likes of the HTC One (4.7"), the Samsung Galaxy S4 (5"), the Moto X (4.7"), or the insanely large Samsung Galaxy Note 3 (5.7"!) Nonetheless, there are many iPhone fans who appreciate the phones smaller form factor who will not be disappointed.

The new iPhone 5s comes with an 8MP camera (so does the 5c, the former has a slightly larger aperture which should result in better pictures.) iPhones competitors have 10 or 13MP cameras (except the highly touted HTC One, which gets by with a proprietary 4MP sensor.)

The iPhone 5s and 5c's operating system features speed burst photography and 120 fps 720p and slow-motion photography. Both of these features exist in some iteration or other in the competition. Seemingly the slow-motion capability is superior in execution, however, to HTC and Samsung's similar solutions.

Something that David Pogue loved in his New York Times Review, the dual-colored LED flashes, intended to get the photo's color temperature right and minimize blown out photos. This is very cool, and we can't remember seeing it on any other smartphone's camera. Kudos for this one.

Sensors and Other Technology

The phone pulls together more comprehensive and more sophisticated sensor data with its new M7 motion sensing chip and a CoreMotion API to get at the data. This chip constantly monitors (while promising low battery consumption) the accelerometer, gyroscope, and compass to "understand" the movement of it's carrier.

Clearly they have health and fitness applications in mind for this package of data. Moto X has done the same (based on what we know at press time) and it is a nice advance for both platforms. This could be consider a second tick in the innovation column, except that they aren't the first to get there. That said, most of their competition (I'm looking at you Samsung S Health) should be playing catch up on this.

The phone does not accept an external SD card like its competitors (no surprise there.)

The phone does not support wireless charging (LG G2 and Samsung S4 do, the latter with accessories).

The phone does not have a NFC radio (still, Apple!?)

As expected, Apple isn't saying how much RAM (memory) is in the device, or the actual size of the battery. Those are always tightly held secrets (until someone opens the thing up). Additionally, the device uses Apple's own (proprietary) Lightning connector. No surprises there.

There's not a lot to write home about, as most of the other "new" functions have already been put into use by other smartphone companies.

However, we do like the fingerprint sensor and the new 64-bit processor - both fantastic advancements. We also enjoy the functionality and affordability of the 5c, bringing smartphone technology to more audiences. We like the way Apple brings this all together in a tight package, and Apple's "walled garden" is the right solution for many users.

Want to learn more? Here's Endgadget's scoop. Also, Cult of Mac put together a iPhone 5s 5c Keynote in 90 Seconds, as they're want to do. Entertaining, at the least.