Is My Smartphone Always Listening to Me? 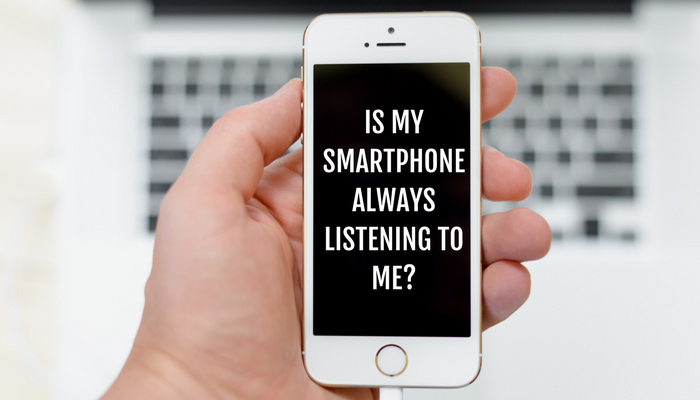 Those were the words of my friend Charlie a few days ago, holding up his iPhone and insisting that I look at a screenshot of a Facebook ad.

Instantly, I got what he was talking about. See, a few days earlier, Charlie and I, along with a few other pals, had held a long conversation about fast food, focusing in on one restaurant’s curly fries in particular. Lo and behold, Charlie had been served up an ad for that chain’s fries on his Facebook feed later that very night.

And he’s definitely not the only one who’s experienced this phenomenon! In fact, lots of people who receive targeted ads, seemingly out of the blue, wonder about whether the ad was the result of their iPhone or Android device listening in on their private conversations.

As a matter of fact, being served targeted ads as a result of saying something out loud is such a common internet rumor that there’s a running discussion forum about it over on CNET, and the BBC has compiled a lengthy list of user stories on the subject here.

But is there any real merit to this big time marketing conspiracy theory? Are developers really using your smartphone to listen to you speak, and then selling that data off to advertisers?

So, what’s the reality? Are our phones listening to us non-stop – and if so, what can we do to stop them? Here’s what we know…

Is Your Phone Listening to You?

Is your iPhone or Android smartphone recording your conversations?

Long answer? Maybe… But it’s a lot more complicated than you might think.

What we know for sure is that the capability to carry off this feat is definitely out there. It is more than possible to create an app that can “drop in” on people remotely by accessing the microphone on their smartphone.

How do we know this? Well, for one thing, the BBC conducted an experiment where they asked a developer to build an app that could listen in on a conversation privately, without it “being obvious” to the user. The respondents were able to build just such a snooping app in “a couple of days.” The prototype was able to work “practically in real time” and recognize “most keywords,” all with minimal battery drain and no data spike – meaning that it would be practically invisible to the average smartphone user.

The most damning part? The developer was able to build this stealthy recording app with “a lot of code that's already out there,” as he told the BBC.

We also know that apps – and the platforms that sell them, such as the Apple App Store or the Google Play Store – have been dinged in the past for snooping on users. Recently, for example, TechCrunch highlighted this with the story of Alphonso, a company whose software let apps use a “smartphone’s microphone to listen for audio signals in TV ads and programs.”

Now, it’s important to recognize that what Alphonso does is quite different than what Facebook, Google, and other apps have been suspected of doing. And there are other reasons for optimism – to assume that our apps are not tracking our conversations and selling off our words to advertisers.

When most people worry about being served ads based on their conversations, they primarily worry that Google and Facebook are behind the snooping. There’s a reason for that! As we’ve noted on this site before, these two behemoths are the biggest players in digital ad spend by a wide, wide margin.

Fortunately for consumers, both of these major tech companies strongly deny that they use microphones to listen in smartphone users and harvest data.

As the BBC put it, after reaching out to Google:

"Google said it 'categorically' does not use what it calls 'utterances' - the background sounds before a person says, 'OK Google' to activate the voice recognition - for advertising or any other purpose. It also said it does not share audio acquired in that way with third parties… Its listening abilities only extend to activating its voice services, a spokesperson said."

“Facebook also told the BBC it does not allow brands to target advertising based around microphone data and it never shares data with third parties without consent… It said Facebook ads are based only around information shared by members on the social network and their net surfing habits elsewhere.”

What’s more, Google prohibits apps that collect information without users’ permission from being sold in its Play Store. Apple’s App Store also strictly requires apps to be upfront with users about issues of privacy and device access. As TechCrunch points out:

“… today’s app stores operated by Apple and Google require apps get user consent when an app wants to tap into the microphone. On apps distributed by the iOS App Store, there’s even a dedicated pop-up that forces you to agree to the microphone usage when the app first runs.”

Now, with that said, many people are quick to hit “agree” to such messages and move on, and may not fully grasp what permissions they’re granting to different apps and programs – or realize the scope of what they’re agreeing to. It’s easy to see how that could be a problem. Facebook has also recently come under fire for harvesting information about mobile users' contact lists and call logs - even if it's not clear whether or not the service has been actively listening in to conversations, or for how long this monitoring has been "opt-in."

One final reason that consumers can take heart? Historically, the US government has been fairly aggressive in pursuing tech companies that violate consumers’ rights to privacy. For instance, when there was a concern a few years back about app developers taking personal user information without consent, Congress launched an inquiry, which resulted in the iOS app store changing some of its policies. Similarly, the FTC once fined tech manufacturer Vizio more than $2 million for collecting users’ information on smart TV sets. At the time of this writing, Facebook is currently being investigated by the FTC for issues with data security - which could bode well for consumers moving forward.

If My Phone Isn’t Listening to Me, Why Am I Being Served Ads?

So, assuming that we can trust app developers and mobile companies to respect our data – and our private conversations – what’s behind the phenomenon of these eerie targeted ads?

On the one hand, there is a psychological explanation. As the BBC points out, human beings naturally tend to seek out logical explanations to seemingly random events. We see an ad that we were going to be served anyway, remember our recent conversation, and jump to a satisfying enough conclusion – even if it’s not necessarily the correct one.

Confirmation bias could also be a factor. That is, the more strongly you believe that your phone is listening to you and selling ads for you, the more likely it is that you’ll find evidence that this is happening – even if the connections are tenuous at best.

Finally, and most importantly, consumers must remember that, even if Facebook, Google, and other social media and tech companies aren’t listening in on us, they are still harvesting our information from countless other channels and sources.

As one Facebook insider once put it to WIRED:

"The harsh truth is that Facebook [along with other media companies] doesn’t need to perform technical miracles to target you via weak signals. It’s got much better ways to do so already… Remember, Facebook can find you on whatever device you’ve ever checked Facebook on. It can exploit everything that retailers know about you, and even sometimes track your in-store, cash-only purchases; that loyalty discount card is tied to a phone number or email for a reason.”

This insider calls this vast network the “Advertiser Industrial Complex,” and it’s at work in many different ways. Even if they’re not getting your information from eavesdropping, companies are collecting your data in order to target you, in a myriad of different ways, from tracking your contact list to following your online behavior patterns.

So, to go back to the example of my friend and that curly fries ad? The reason we were talking about fast food in the first place was because earlier that day he had gone to another chain for dinner. Imagine how many ways he could have interacted with tech during that process – such as searching fast food restaurants on Google, mapping out locations on his phone, paying with a virtual wallet, checking in on social media, or visiting a Yelp page or corporate website.

In other words? He was almost certainly leaving a digital footprint behind - one that created the profile of someone who likes fast food, thus increasing the likelihood that he’d be served fast food ads. Make sense?

There are countless stories of little incidents like my friend’s, which crop up as a result of this vast data marketing network. For instance, discount movie service MoviePass recently came under fire for collecting user data. There’s also a legendary story of Target tracking a woman’s shopping habits and serving her family ads about pregnancy – before her own parents learned that she was expecting!

How to Stop Apps from Listening In

So, we’ve determined that users can be somewhat confident that their phones aren’t using third party apps to spy on their conversations. What’s more, even if they did, any data accrued from eavesdropping would just be one small part of a much bigger digital network, determining what ads you’ll be served online.

With that being said? It never hurts to be overly cautious! There’s definitely still reason to be wary of having your microphone on all the time. Fortunately, both Android and Apple phones give you the ability to deny an app permission to use your microphone.

While some apps do need microphone access in order to function properly, plenty of others don’t. You may need to experiment and adjust your settings on a case by case basis.

In any case, here’s how to deny apps microphone access on:

Users can go to:

… and then toggle permissions from “on” to “off.”

… and then toggle permissions from “on” to “off.”

Looking for other solutions? There are also third party apps out there that bill themselves as microphone blockers or “anti-spy” apps. This geek’s perspective is that you should take care to research all of your available options thoroughly, and take any sweeping promises of increased privacy with a big grain of salt.

Here at Geek, we love breaking down smartphone myths – whether it’s the case of the iPhone tracking you to work, or the parking app that remembers your car better than you do. But we love digital marketing even more. When you have any questions about web development, SEO, social media, or email marketing, with an emphasis on mobile functionality, don’t hesitate to drop our team a line!