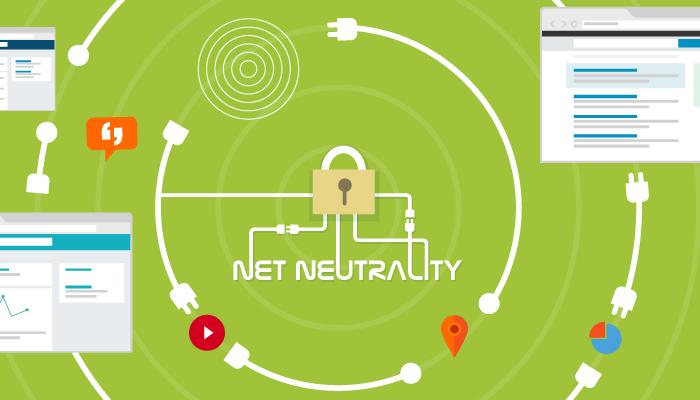 If you’ve been following the news at all lately, you might have heard the phrase “net neutrality” come up a few times.

There is currently a political battle unfolding around the concept: Comedian John Oliver has devoted a few recent segments to net neutrality, and a few major internet power players, including Netflix, have come out swinging on its behalf. All of this action is because of some recent steps taken by Congress and the FCC, which has begun to dismantle some of the foundations of net neutrality established during the Obama administration.

But what exactly is net neutrality, and what does it mean for your digital marketing efforts? Let’s take a look:

Put simply, net neutrality is the idea that internet service providers (ISPs) have to grant all websites and all internet users the same access to content, services, and applications, with no exceptions. Under net neutrality, ISPs cannot favor or exclude certain websites, products, or content because of their source. The theory is that is long as you pay for access to the world wide web, then that access should be free of influence or discrimination.

This is more or less the system that we have in place right now, one in which web users have equal access to all parts of the net. As we mentioned earlier, though, net neutrality measures could soon be facing some serious rollbacks, leading to an internet ecosystem that looks entirely different than the one we’re familiar with today.

Essentially, without mandated standards for neutrality or fairness, ISPs could have a much greater say in who gets access to what content online, both explicitly (by literally restricting access to certain sites) and more subtly (by, say, slowing download speeds or load times to a crawl for certain sites).

There are any number of models for how internet service might work within a non-neutral system. One common idea is that ISPs may roll out tiered pricing models for internet access; Moz lays out one hypothetical scenario in a recent blog post, suggesting that an ISP could, in theory, charge $50 a month for access to a few core sites, $100 for access to second-tier sites, and then $150 for “all” websites.

Even if a consumer were to pay up for access to the full and unlimited internet in that model, though, there is no guarantee that their experience would look like it does right now; for instance, an ISP may be tempted to throttle download or compression speeds for WidgetX.com solely because it competes with WidgetY.com, which is owned by that ISP’s parent company.

So that’s another key thing to consider about a non-neutral internet: Websites would likely need to find a way to pay up to either encourage fair treatment for their content or to buy into a different service tier. And that could well kill digital marketing as we know it.

The Impact of Repealing Net Neutrality on Digital Marketing

An internet free of neutrality standards could well be an internet entirely inhospitable to digital marketing as we know it. In a worst-case scenario, just about every aspect of present day digital marketing campaigns could be rendered useless in the blink of an eye – that means SEO, pay-per-click SEM, display ads, email marketing, and social media marketing - for small- and medium-sized businesses.

And even if the tools themselves were unaffected, the reality is that the digital ecosystem would probably no longer be hospitable to all but the very largest (and richest) companies.

And no, we don’t feel that we’re being too dramatic or hyperbolic here! It just makes sense: A free and balanced internet promotes competition. With net neutrality in place, more individual actors have more access to more customers. Period.

The bar to entry is lower under net neutrality, as businesses don’t need to pay off ISPs or worry about paying more for access to certain services (like quick-loading video streaming, for example). Without net neutrality, the level playing field suddenly goes out the window, and power could be consolidated among the biggest companies, those with the resources necessary to keep up with hefty charges and fees. If that were to happen, small and local businesses could drop off the internet en masse; that would lower competition, and lead to the decay of the digital marketing frameworks that we're able to use so successfully right now.

No need for Google results pages if there aren’t lots of results. That means no more SEO or SEM.

Would Twitter and Pinterest be first-tier or second-tier websites? If they don’t make the grade, that suddenly eliminates the need for huge swaths of social media marketing.

Email marketing? Could be spoiled, too. For one thing, many users could find themselves unable to use web-based email providers. For another, clickthrough could be literally impossible if a user hasn’t paid up enough to gain access to your site.

In all, digital marketing would fail to be effective because the internet itself would cease to be effective; as Adam Heitzman put it in an editorial for Inc., non-neutrality could line the pockets of ISPs, but it would also “take the internet from being a competitive and profitable resource to being unaffordable, restrictive, and inaccessible.”

Want to make your voice heard when it comes to net neutrality? In addition to lobbying your representatives in government, we encourage you to keep up with the comments on the FCC’s net neutrality proceedings here.

There is overwhelming support for net neutrality across party lines, with 81% of Democrats and 73% of Republicans in favor of it, according to a recent poll from Mozilla. This isn’t a partisan issue, but a spiritual fight for the potential of the internet to keep doing amazing things for small businesses like ours and yours. Where will you stand?

To share your thoughts about digital marketing or the state of the internet, don’t hesitate to drop us a line! The Geek team is always ready to talk shop on Facebook or Twitter.