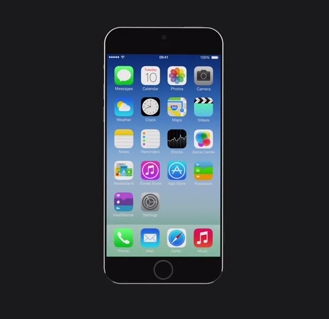 Yet another iPhone model, the iPhone 6, is set to release this coming September of 2014, according to a recent report in the Nikkei Asian Review and Business Insider.  Anything special that we can expect?

So far, the most interesting news for the iPhone 6 is that it is anticipated to come in two different screen sizes: a 4.7 inch model and 5.5 inch model.

To date, the iPhone 5 and 5S have had only 4-inch screens (the only smartphone manufacturer with screens that small, in fact.)  Samsung and HTC both have 5 inch screens already, so it looks like the iPhone is playing a little bit of catchup in that regard.

Additionally, the iPhone6 should have a "significantly higher" screen resolution.  Specifics have not yet been released on this matter.

Many are anticipating the iPhone 6 to have a similar look, feel, and function that the iPad Mini and iPad Air do.  A "concept" video from Apple fan Sam Beckett puts all of these major components into an expected model - strictly based on rumors, of course, but interesting nonetheless.

Will these upgrades be enough to be a fierce competitor for the holiday season of smartphone sales?  Brian Marshall at ISI thinks so, saying this will be the "mother lode" of upgrade cycles for Apple, as it will be relatively different from old models and therefore will boost sales for pre-existing Apple customers.

Personally, we're hoping for an increased battery life, as the previous models have had some battery issues with iOS7 (though there are some great ways to combat this).  We'll have to wait and see on this, however.