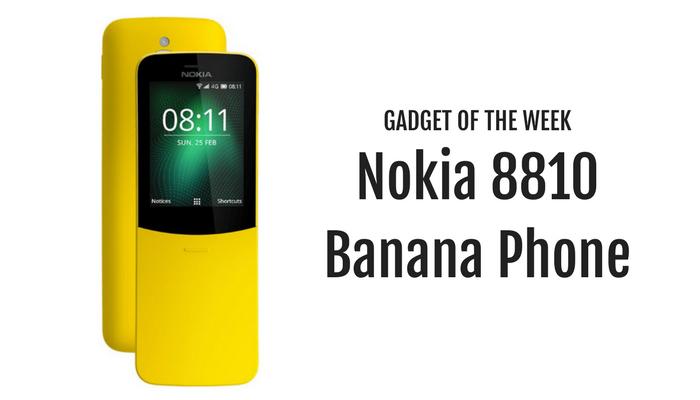 In a lot of ways, 2018 is the year of the reboot. Think about it! Will & Grace and Queer Eye are back on the small screen, there’s a brand new Han Solo speeding his way into theaters… We could go on!

Even in tech, 2018 may well be remembered as the year that a beloved icon comes back to life! We’re talking, of course, about the Nokia 8810 – perhaps better known as the Nokia “banana phone.”

A favorite of hackers and hipsters – and a cult classic, thanks to its pivotal role in the Matrix movies – the Nokia 8810 was very much a product of its time, featuring not only a tactile keyboard, but a long and gently curved design, as well as an actual slider that let you answer and end calls in dramatic fashion. It even came in bright yellow, making those produce comparisons all but inevitable.

It would be easy for HMD, the company behind the relaunch of Nokia branded phones, to release the 8810 as a chintzy marketing gimmick. But, in reality, the company is throwing more weight behind this product than you might think.

For one thing, it will be a 4G LTE smartphone, with a decent amount of storage; more than enough processing power for surfing, chatting, and streaming; and genuinely breathtaking battery specs (up to 25 days of use on a single charge!).

Even more impressive is the fact that HMD is actually creating its own app store for the device’s unique OS; Facebook is already on board, which may mean that other third party developers will create Nokia-specific versions of their apps, as well.

Imagine telling Neo and Morpheus that their phone of choice would be able to pack that much power all the way back in 1999!

Want to impress all of your friends with this sweet throwback gadget? Unfortunately, you’ll need to wait a little bit longer; the Nokia 8810 4G is expected to begin retailing in the summer of 2018. The good news? You may be able to get your hands on one for less than $100!

Think there are any other gadgets that our team should try? Whether it will play right into our (ample) sense of nostalgia, or make us dream of the future, we want to hear about it! Let us know what we should cover here on our blog by dropping us a line over on Facebook or Twitter, where we keep the tech talk going 24/7.