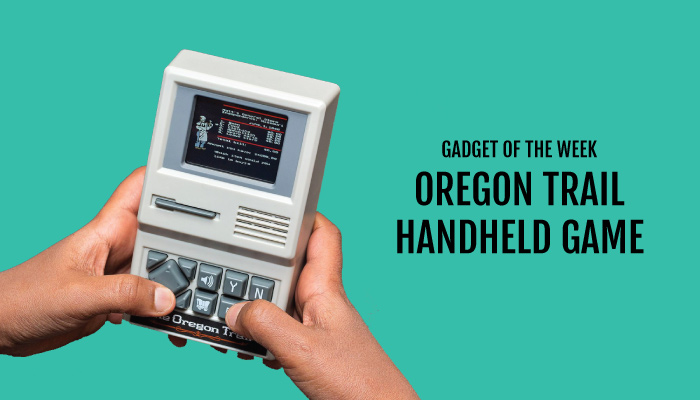 For all the ‘70s and ‘80s fanatics out there, there’s a new nostalgia-packed game just for you. The Oregon Trail Handheld Game is a blast from the past in more ways than one -  a single player adventure-style video game with a look reminiscent of an old Gameboy. Oh, yeah.

The original Oregon Trail was a computer game, designed to teach young school children about the realities of life on the western trail during the 19th century. Since it was first produced in 1974, the game has been reworked to keep up with the times, with new iterations dropping for the latest technology of the day.

In this most recent version, the first handheld model of the game, players choose their profession, then assemble a group of traveling companions for the voyage.

For originalists out there, the handheld game promises 80s-style “graphics, sounds, and game play.”  While the screen is relatively small and there are only a total of 10 buttons (yes buttons, remember those?!), the complexity of play is deep, and true to the original computer experience. You’ll be able to go “hunting” for food and buy and trade supplies along your journey across the trail, as well as navigate your wagon over treacherous mountains and rivers.

And all this, while trying to avoid seeing those dreaded words pop up on the screen: “You have died of dysentery.”

For $24.99 from Target, you’ll be able to indulge your inner child or pass along the newest version of a long-beloved game to a younger generation.

Though Target’s Oregon Trail Handheld Game has a suggested age of 8+, it’s a retro-inspired gadget fit for all ages, and something we can all get behind jumping on the band-”wagon” for.

Can you think of any other game-style gadgets our team should try? Do you have a love for vintage games too? Help us stay up-to-date on all the best in Geekdom by letting us know at Facebook or Twitter. Your idea could even be featured on one of our future blog posts!