The Over-Upgrade Complex – Why You Shouldn’t Upgrade Your Smartphone 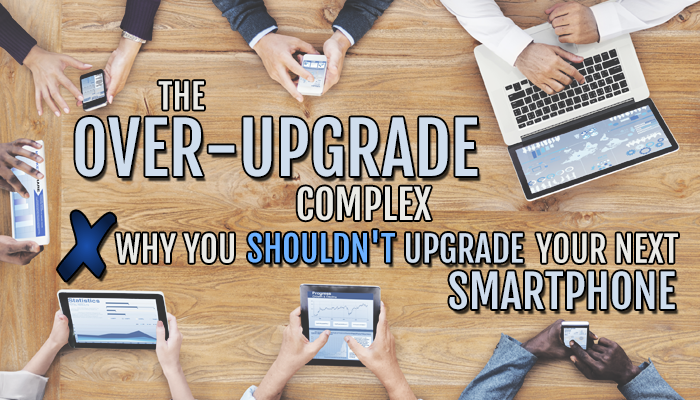 We are a culture that feels continually compelled to buy the "latest and greatest" - especially when it comes to our smartphones. There's a reason the Apple Keynote is an eagerly awaited event. But should we really be that excited to toss our our iPhone 6 for the 6S? Or our Samsung Note 4 for the Note 5?

An Upgrade Culture Without the Accompanying Upgrade Quality

Smartphone upgrades are becoming less and less drastic. The promise of "the new" and "the better" phone is a prolonged culture from days past, as the "new" and "better" elements of the latest upgrade of modern times are really quite minimal - maybe a better camera here, a tougher screen there, but nothing earth-shattering.

The reality is our flagship smartphones aren't blazing the trail towards new frontiers anymore. We're no longer moving from QWERTY keyboards to touch screen, or adding a camera to our phone for the first time. In other words, we're not seeing massive premium differences between models that warrant the premium upgrade fees that accompany them. The flagship smartphone really may be on its last legs.

And yet? We still upgrade, and we upgrade a lot. Older smartphone models that we've moved on likely end up collecting dust somewhere in your house, alongside more past phones and out-of-date technology (remember that Walkman of yours?) When you do eventually decide to chuck some of your older phones, as a responsible technology user, you'll likely end up giving it to a technology recycling facility of some kind. Recycling means no waste, right?

Unfortunately, that's just not the case.

A Wasteland of Usable Technology

E-waste is accumulating at a rapid rate. Sure, we've seen photos of computer parts being taken apart and recycled into other models rather successfully, but this is not a rapid process. Phones fall victim to a similar plight.

Alongside old phones getting tossed in favor of new technology, the number of unusable accessories to accompany the old phones is sure to be a massive quantity. Many iPod docks and iPad connectors have become mostly obsolete as the devices got slimmer and Apple opted for new charging ports for their newer devices. The majority of the obsolete connectors that have been abandoned are, actually, still in good working condition.

What Can We Do Differently?

Is there a good answer for the rapidly accumulating technological waste? Universally, no, but individually, yes. Instead of chucking your "out of date" electronics, you can try:

Or, if you have a real upgrade problem (like our own Chief Geek), don't just hold on to your old devices! Make the effort to sell your old device on eBay or Craigslist to someone who will actually use it (and likely appreciate it). (Editor's note: Hey, watch it!)

With some creativity and a conscious effort in waiting a little while to buy, perhaps we can make a difference.