Gadget of the Week – PhunkeeDuck 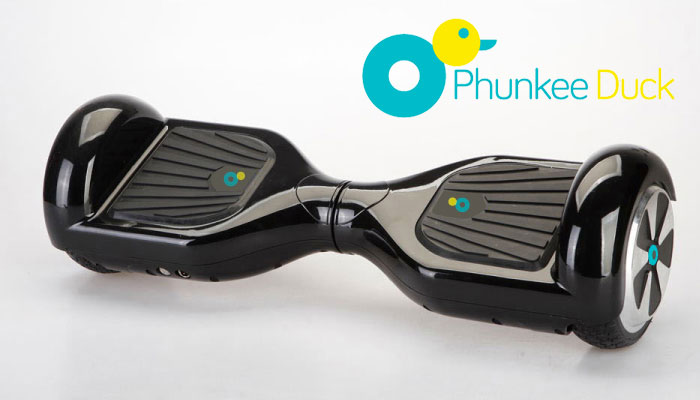 While they’re not quite the amazing flying toys that Back to the Future II predicted, hoverboards have become a reality – and a hot commodity in the gadget industry.

And while the field has grown crowded – as you can see in this amazing Daily Show segment – there is one hoverboard brand name that is, as Bloomberg puts it, “winning the hoverboard race.”

Beloved by celebrities and social media stars, including Kendall Jenner, Wiz Khalifa, and Justin Bieber, the PhunkeeDuck (the name was inspired by co-founder Matt Waxman’s younger brother, who loves “Duck, Duck, Goose”), the PhunkeeDuck is a viral sensation and a growing force in the personal transportation industry.

How does it work? Think of a Segway without the handle, and you’ve got a pretty good idea. Riders control the small device, which weighs 18 pounds but can support up to 300, by small shifts in movement: Just lean slightly forward to advance, lean back to reverse, and point your feet to turn left or right.

The PhunkeeDuck boasts UL certified battery cells in its packs and chargers, making it safer than some of its competitors. A full charge takes two to three hours, but will last six to seven hours, or roughly 10 miles.

PhunkeeDuck’s site promises that the gadget is “the next step in the evolution of transportation” and will “change the way you travel and interact with the world around you.” While we won’t go quite that far, we will say that the Duck is a cool gadget for anyone looking to add a little flair to their daily walkabout. It can be yours – in a variety of colors – for $1499.99 from phunkeeduck.com.