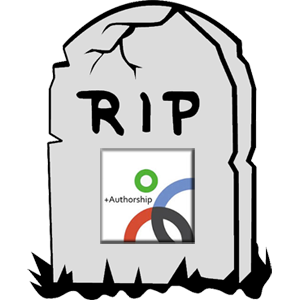 It's official. After it's great three year experiment, Google has dropped all authorship functionality from search results, once and for all.

Google Authorship was best known, according to Search Engine Land as "a system for connecting multiple pieces of content with a digital signature representing one or more 'agents' (authors)." You may remember seeing a signature pop up on Google search pages with a picture and a name followed by a brief outline of whatever article the author was connected to.

It was designed to be used, essentially, to score a an agent's authority with "Agent Rank" - mostly a theoretical idea until June 2011, when Google+ came into effect. Google+ created profiles for these authors which helped define a true Google identity, if you will.

Since then, Google Authorship has gone through a bevy of changes which can be viewed here at Ann Smarty's blog, but they have now come to an end. Why? Here's the scoop.

Google is known for extensively testing every product and innovation that comes their way, as we can see by the long date range of this Google Authorship test. If their data demonstrated Authorship was not meeting Google's goals, such as lack of user adoption or not enough value, it gets taken down.

According to John Mueller of Google Webmaster Tools, the 3 year testing period was not up to returning enough value for the data processing resources allocated. Here are the two areas he specifically focused on:

Mueller describes participation in authorship as "spotty at best, and almost non-existent in many verticals." There were evidently multiple cases of incorrect participation, and most non-tech-savvy owners found the linkage far too complex to participate.

In 2012, however, Google did attempt auto-attribution for authorship. This unfortunately led to many well-publicized cases of mis-attribution. Mueller references an instance where Truman Capote was being shown as the author of a New York Times article 28 years after his death. Naturally, this is a pressing and challenging issue for auto-attribution which seemed to trouble Google significantly.

Perhaps even more significant was Google's lack of results when it came to "click behavior" on search result pages. Authorship snippets were, surprisingly, not getting many more clicks than those without. This came as a shock to many in the digital marketing world, as it was formerly acknowledged that Authorship did yield higher click-through rates.

Specifically, Mueller elaborated in a conversation with Search Engine Land that Google's data revealed that "users were not getting sufficient value from Authorship snippets." We speculate that value means an overall user behavior was not significantly affected by author snippets, especially over time.

Will we see any resurgence of Authorship?

It's hard to say if this will be rehashed. In the immediate-term, it seems clear that the results do not warrant the expense to develop this platform. This could, however, be another instance of Google going back to the drawing board and implementing a new strategy in the future.

What we do notice is that Google is continuing to show author posts in some personalized results, based on the searcher's individualized relationship to that person. This appears to be directly related to Google+ content that a searcher has a direct connection to through Google+ circles or Gmail contacts (when the searcher is logged into their Google+ account enabling personalized search).

Do you find value in Google Authorship posts, or is Google making the right decision in putting an end to the study? Share your thoughts below.