App of the Week – Sidekix 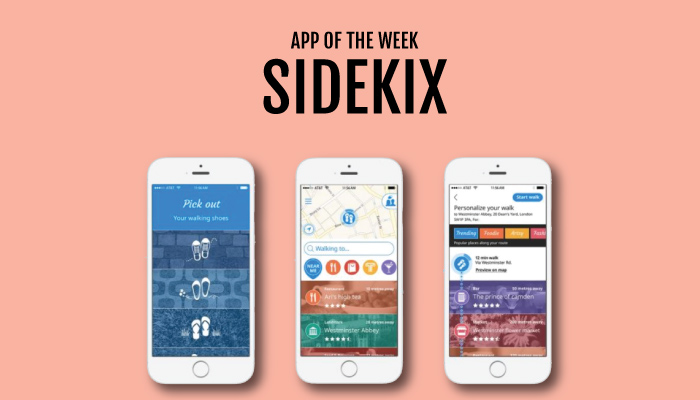 There are times when we’’re in a hurry and need to get from point A to point B in the shortest amount of time possible, and other times when we want to take a step back and notice the overlooked sights of a city.

For those times, a pedestrian-focused navigation app called Sidekix can bring out the inner urban explorer in all of us.

Sidekix describes itself “as a smart walking and urban discovery app for people who love to explore on foot.”

The “discovery” aspect of Sidekix is its biggest component, apart from navigation logistics. Making your way through the app is as easy as using a typical maps app on your phone. However, the point of Sidekix is not to help get you to your destination in the shortest amount of time. Instead, the app wants to guide you towards well-known and highly rated attractions around the city you’re in.

Once you’ve downloaded the free mobile app, you’ll be able to type in your final destination. Users will then be able to choose different “routes” based on various criteria including “Foodie,” “Fashion,” “Nightlife,” and more.

To get a sense of the sites you’ll hit along the way, you can click through reviews and ratings. Want to help the next wanderer? You can even contribute a review yourself, after you’ve visited a suggested destination along the route you choose.

If you’re a staunch planner, Sidekix has an option to create attraction-specific routes for cities you plan to visit in the future. Though you still might sift through various online reviews before heading to a new restaurant or local hotspot, Sidekix makes it just a little easier to help discover new spots for your “must-do” list.

Urban navigation isn’t the only cool feature on this app. The more you use the app, you’ll be able to earn “KIX”, or points that accumulate when you do different tasks, which can be as simple as writing a review for a restaurant or simply accruing a certain number of steps. You’ll be able to use your “KIX” at a select group of restaurants, bars, and shops for various deals.

Sidekix updates its usable locations regularly and is available in hundreds of cities around the world. So for your next vacation, this sidekick could just be the travel buddy you’ve been looking for. Ready to give it a try? The Sidekix app is available for both iOS and Android devices.