The State of Snapchat – Is It Still Worth It for Your Brand? 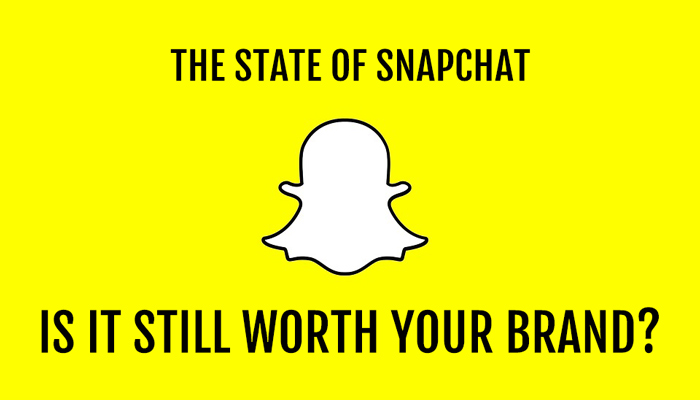 Within the past few years, Snapchat has become one of the largest social media platforms, and currently ranks fifth for the most used among competitors like Facebook and Instagram.

This messaging app has earned a loyal following, thanks to highly popular instant communication features such as pictures that disappear within 10 seconds, and cutting edge facial recognition and augmented reality (AR) software.

It has even become a useful tool for business and marketing strategies, an avenue for brands to use to reach younger, more tech savvy audiences.

Yet over the last few months, it seems like Snapchat’s fate as a successful app has suddenly become unclear, all due to falling stocks and negative PR.

So, that leads us to the question of the moment, one that seemingly everyone wants answered: “Is it really worth it for your business and brand to invest social media dollars into Snapchat?"

Well, the answer can be yes and no. It truly depends on your intended audience, and what type of brand or business you’re promoting. It’s also important to consider the current state of other social media apps and websites before you decide on a direction for your social media marketing campaign.

Let’s dive in, and help you consider whether sticking with Snapchat is the best use of your brand’s marketing dollars:

How Snapchat Could Help Your Business and Branding

There are many possibilities for promoting your brand via Snapchat, including the use or direct advertising, by sending daily “snaps” - which are photos and/or videos around 10-seconds long - to your followers. This has been compared to organic posting and reach on Facebook, as it is a form of direct advertising.

Within these snaps, businesses can make use of the app’s filters to add layers to a user’s face, such as the popular puppy face or flower crown options (stickers are also a big selling point). Snapchat introduced these “lenses,” more commonly known as filters, in 2016, after acquiring the company Looksery.

Snapchat also features SnapAds, which are most often full-screen vertical videos, 10 seconds in length, and which tend to include an interactive element, such as a CTA encouraging users to “push to visit” an integrated link. These interactive ads can create a higher level of interaction between brands and their followers, creating loyalty and engagements that can turn users into lifelong customers.

Yet, for all this, many critics would argue Snapchat doesn’t place a huge emphasis on something called “growth hacking,” something that other social media platforms do well. and for good reason. For instance, as a rule, Snapchat doesn’t send as many push notifications as Facebook, whereas on Facebook users tend to receive notifications for anything from a friend request to a new message in the Messenger app.

Even though Snapchat isn’t huge on sending notifications, it tries to compensate through a different method of growth hacking.  Snapchat aims to increase daily use with Snapstreaks, “which calls out streaks in which two friends send each other snaps at least once for more than three consecutive days. But it isn't working too well, as daily use hasn't grown much.”

So, a limited growth in Snapchat’s overall users could be a concern for building and enhancing your brand. And that brings us to the fact that...

Age is the Name of the Game

One of the most important aspects of Snapchat is the age group it reaches the most frequently and most consistently. Think of it as the app for the young ones.

To wit? 60% of Snapchat users are under the age of 24, with most falling into the 18-24 bracket. Companies can use the free advantage of this app to market quick, catchy tidbits for their intended audiences by sending short videos or posting them to a branded story.

In February of 2018, other social media sites and apps, such as Instagram, were projected to have a smaller growth for users under 24 compared to Snapchat. Instagram was expected to add 1.6 million users younger than 24, while Snapchat was projected add nearly 1.9 million.

That’s nothing to snap at! So, why the worry among so many brands? Well, a lot of it comes down to...

In February of 2018, Snapchat released an updated version for its users. The redesign incorporated new features that drastically changed the layout of the app.

According to TechCrunch, “Snapchat pulled out Stories from social media stars, brands, and other people who don’t follow you back and pushed them into the other side of the app alongside professional Discover content.”

This update makes it harder for users to view ads and videos put out by brands, possibly hurting Snapchat’s ability to rival other social media platforms when it comes to leveraging promotions for potential brand growth.

While there were little changes to the pillars of Snapchat, such as snaps and Stories, some core functionalities changed as well. For instance, Stories are now situated in the same place you view private messages from friends, scattered in between these chats. This major change left many, many users upset.

In fact, according to TechCrunch, 83% of users felt confused and disgruntled over these new features. On social media and in Snapchat’s user reviews on the app store, many have made clear they are confused why Snap Inc has yet to revert away from certain changes, especially the ones that have drawn so much unrest from its users.

As of now, it’s unclear whether the company will or will not reverse some of the changes made in the redesign.

When Snapchat unveiled its redesign earlier this year, celebrities voiced their negative opinions of the app. But how would a negative tweet or two affect your business? Well, in more ways than you might think.

After a tweet by Kylie Jenner, a businesswoman and celebrity known for her use of social media to market her brand and products such as Kylie Cosmetics, stocks began to plummet for Snap Inc, the parent company of Snapchat.

As a consequence of Jenner’s tweet (among other factors), Snapchat dropped $1.3 billion and later in 2018, Snapchat missed the mark on its first quarter targets. Jenner wasn’t alone in targeting the app for ridicule, and many other social media users lodged their displeasure with the platform on Facebook, Twitter, and other places across the web.

Are Other Apps Better?

Considering that Snapchat has been in a negative press spotlight, it might be worthwhile to explore other social media options.

For brands, the question “Is Snapchat unique anymore?” may b one of the most important topics to investigate.

What has made Snapchat so intriguing for marketers and everyday users alike are its key features, such as the disappearing photos and Stories.” Yet, in recent years, other apps have adapted such aspects of the app - to enormous success.

Instagram and Facebook, two of the largest competitors of Snapchat, have successfully integrated these features into their own platforms, most notably the “Stories” feature. IN some ways, the Stories functionality has, arguably, been improved by Instagram. What about facial recognition and augmented reality software? Instagram has that too, to an extent.

When Instagram released their own “Stories” feature in August 2016, Snapchat immediately took a hit, which continued to into the following year. As of August 2017, Snapchat’s stock price had fallen from a $17 IPO to $13.

Meanwhile, Instagram has been at work. The picture sharing platform, for instance, kept a key auto-advancing feature for Stories, while Snapchat’s redesign started to prevent users from watching stories continuously.

As a result of these and other factors, daily use for Instagram Stories now reaches over 300 million users - while Snapchat’s growth has sputtered out at only 150 million.

So… Is Snapchat Still Worth It?

All of this - the core functionality, the negative PR, the redesign, the spread of stories to other social networks - brings us back to our core question. Is Snapchat the best and brightest option out there for social marketers?

Here’s our take: Considering the success of other social media apps and websites for building your brand, Snapchat probably shouldn’t be the main focus for your social media campaign, as of now.

However, it’s important to realize that no social marketing strategy is one-size-fits-all. If the age group you are trying to target falls under the 18-24 range, then putting additional emphasis on Snapchat could benefit your brand, if you’re shrewd about how you market on the platform.

For other businesses looking to expand their reach, without overextending (and succumbing to platform overload), Snapchat’s stylistic advantages and unique features can still  be utilized to optimize branding strategies and techniques. But, we’d caution to think of Snapchat as a supplemental seasoning to your brand’s social media marketing, and not the key ingredient.

Have any more questions about Snapchat, Instagram, or any other social media marketing channels? Don’t hesitate to drop us a line to keep the conversation going!