5 Lessons We Can Learn About Social Media from NASA 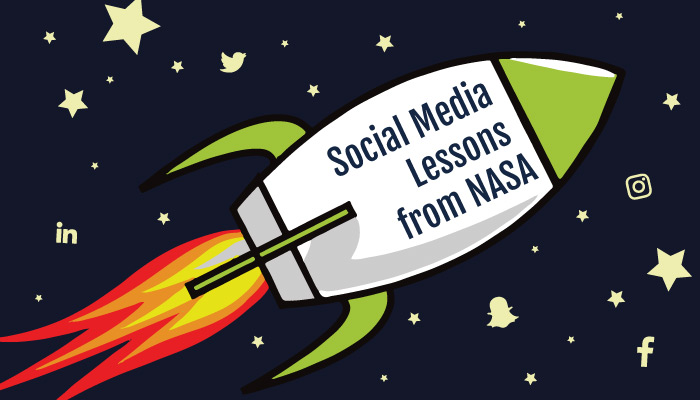 Here at Geek, we’re always looking up at the stars and dreaming about the future… of web development and digital marketing. But there are plenty of other people who look to the stars and see adventure, opportunity, and science’s next cutting edge.

The astronauts, analysts, technicians, and public relations teams at NASA aren’t just inspiring because they’re exploring the “final frontier” of space – they inspire us because of the way that they’re bringing back those discoveries and sharing them with those of us who are still stuck here on earth.

Recently, Loren Grush of The Verge held a fascinating interview with Jason Townsend and John Yembrick, two of the three social media leads at NASA headquarters, about what it’s like to help operate the organization’s 510 accounts across 14 platforms.

So, what can earthbound social marketers learn from NASA? To put it in really scientific terms: tons! Here are five major pieces of wisdom from NASA’s social media team that you can put to work for your brand today:

As we’ve already mentioned, NASA operates more than 500 accounts across various platforms, tweeting, snapping, and sharing from the perspective of the Hubble Space Telescope or Robonaut, the humanoid robot working on the International Space Station.

So while NASA thrives on Twitter, they’re also making use of plenty of other platforms. Your brand should do the same. Take the time to consider your social media goals, and then decide the best channels for accomplishing them. Want to engage directly with complaints and questions? Consider Twitter and Facebook! Want to give your fans a behind-the-scenes peek into your organization? Consider picture-sharing platforms like Snapchat, Facebook, or Instagram.

There are countless social channels that you can use to spread your brand narrative, increase referral traffic, and drive conversions – why not put as many to work as possible?

“Using the tools and all the features that we have, we’re able to take everybody along for the ride, which is very different than having something go out as a press release. [That puts you] kind of at a distance and kind of detached from the experience of what’s going on. Social media has really personalized what’s been going on and allows folks to get embedded in with it.”

So just how do you do that? The easiest way is to encourage conversation and participation, not just observation. Encourage your audience to reach out and ask questions, and be ready to answer them. Share polls and lead contests on social media, and take advantage of more diverse content, including live video.

As the NASA social team explains, no two accounts of theirs sound exactly alike. And, while the team communicates one way internally, they adopt a completely different voice in order to talk to the public, avoiding jargon and acronyms and “trying to break things down so they’re understandable to the general public,” as Yembrick explains.

Your social presence should shoot for the same goals. Talk directly to your audience, not above them, and make sure you have a distinct voice all your own. Don’t feel like you need to be stuffy or formal – instead, be friendly, personable, and, above all, social!

In addition to NASA’s centrally-controlled accounts, the organization benefits when “social media superstars” like astronaut Scott Kelly decide to post to Facebook or Twitter. And while NASA sits down and gives its team members some tricks, guidelines, and best practices, ultimately, the decision of what to share is “entirely up to them,” Townsend explains. “It’s an optional activity; there’s no requirement… It’s a much more personal journey for them to tell the story of what they’re working on, since it’s all opt-in.”

Your brand should try to involve as many personal shares and stories as possible, too. Perhaps your CEO has a dedicated Twitter following all his own. Perhaps a local celebrity is a client. Maybe you have a large and satisfied base that you can turn to for testimonials and other user-generated content. Whatever the case, try to have as many voices as possible leading the conversation about your brand on social media.

NASA’s philosophy when it comes to online complaints and criticism? Don’t feed the trolls or get into “silly Internet debates” but do respond honestly and swiftly to real criticism. Your brand should adopt the same philosophy for engaging with customers online. It comes down, ultimately, to matters of reputation, service, and brand loyalty. Take pride in your organization and respect your audience. Yembrick puts it well, saying:

Have any more questions about social media marketing for businesses? Want to talk shop? Geek would love to hear from you! Why not check us out on Facebook or Twitter to keep the conversation going!