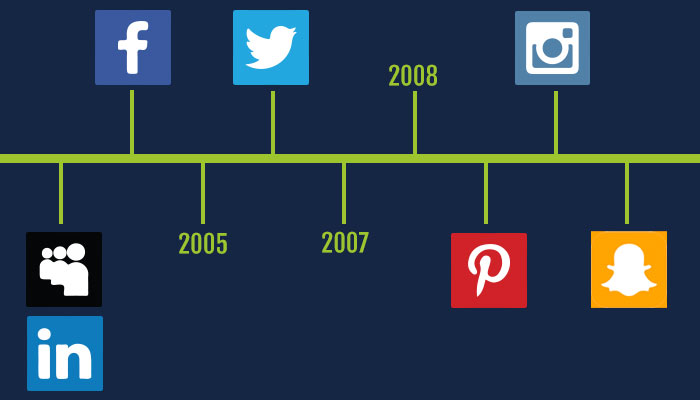 It’s hard to imagine a world without social media, but the reality is that this massive internet force – one that has launched revolutions, connected families, and generated billions of dollars in revenue for brands all across the world – is younger than you might think.

In fact, if social media were a human, it would still need to wait a year before being legally allowed to order a drink.

You see, the story of social media – and the impact it has had on the marketing and advertising industries – really begins just 20 years ago, in 1997. Let’s take a look at the evolution of social networking; maybe along the way, we’ll get a feel for how it blossomed from “interesting idea” to “marketing juggernaut.”

Tim Berners-Lee, widely hailed as “the father of the internet,” once said that,

“The original idea of the web was that it should be a collaborative space where you can communicate through sharing information.”

Indeed, what we now know think of as the “world wide web” was initially largely used to share information among academics and professional agencies. As the technology became more widely available and accessible with home computers in the 1980s and ‘90s, people began to view the internet in more social terms; if everyone was using it, after all, couldn’t it be used to connect everyone?

That thinking led to the birth of the first true social media network, known as SixDegrees. Launched in 1997 and based around the concept of “six degrees of separation,” the service allowed users to invite others to join their list of friends and family on the site and externally; contacts could be arranged in terms of first, second, and third degrees, allowing every user to see how they connected to every other user on the site and send messages or post bulletin board updates.

Next up came Friendster and MySpace; launched in 2002 and 2003, respectively, these two networks honed in on the idea of sharing content among connections even further, largely by emphasizing the customizable personal profile, which allowed users to truly put their identity online for the first time. LinkedIn also came into being at the same time; the business networking behemoth first launched in 2003, allowing for the “networking” that had always gone on over breakfast or after-work drinks to migrate online for the first time.

Most of these sites have come and gone (with LinkedIn as the notable exception); today, we remember them most for shepherding in…

Most of the social networks that dominate our lives today all arose during the mid-aughts: Facebook, for instance, was launched in 2004, reaching a million users in just ten months. SMS-inspired microblogging service Twitter was founded in 2006, and introduced the hashtag in 2007; social scrapbooking site Pinterest was first conceptualized in 2009, while Instagram was launched (and gained its first million users) in 2010, before being bought out by Facebook in 2012.

This six year span is inarguably the most important in the history of social media, notable not just for the sheer number of networks launched during the period, but also for what they each managed to accomplish.

As these sites competed (or collaborated, or bought each other out) for users and revenue, they helped irreversibly shape the digital landscape into the one we inhabit today.

For a start, this period saw Facebook launch its mobile version (circa 2006) and iPhone app (c. 2008); Twitter, meanwhile, was influenced by the rise of texting culture, and Instagram was designed for a mobile-first experience. In all, we can look at the expansion of social media to mobile devices as a byproduct of our cultural shift to smartphones and tablets during this period. Today, the majority of our online usage actually occurs on mobile devices, and it would be hard to overstate how much this massive mobile boom – aided by the burgeoning popularity of social media – has forever changed our culture (case in point – how many of you are reading this on a smartphone right now?).

Facebook, in particular, led the charge in driving marketers to social; it launched its first self-service ads platform and branded pages all the way back in 2007, allowing the network to reach $150 million in ad revenue within a year. Other networks followed suit, with Twitter launching promoted content and accounts in 2010. But no competitor really managed to unsettle Facebook, which still had its biggest marketing innovations in the holster…

The 2010s have seen social media continue to solidify its place in our culture; the elder statesmen have become media institutions, and new upstarts, like Snapchat (launched in 2011) have continued to keep the game exciting by appealing to younger audiences and further heightening the importance of mobile design and innovation.

Thanks to Snapchat and Periscope, the look and feel of our social networks has changed across the board, as has fundamental functionality: Today, there is more emphasis on streaming video, GIFs, and limited-run “stories” than ever before, turning social media from a primarily text-based landscape to a primarily image- and video-driven one.

From a digital marketing perspective, the ‘10s are most notable for turning social media marketing from an advanced level tactic to a fundamental must-have. Business pages are all well and good, but the game has also changed enormously.

For one thing, there’s just a lot more money in social marketing than ever before – Facebook’s ad revenue, for instance, has just kept growing and growing by leaps and bounds, booming from $10 billion in 2014 to more than $25 billion in 2016. Remember that young upstart Snapchat? Its ad revenue had already reached $50 million by 2015; in that same year, Instagram ad revenue topped $500 million.

At the same time, rates of social ad spending increased; social media accounted for more than 20% of total digital ad spending across brands by 2016.

This growth in ad spend (and, subsequently, ad revenue for the social networks themselves) isn’t an accident; social media channels have pulled out all the stops in “corporatizing” themselves, launching platform after platform designed to make marketing easier – and more lucrative – for businesses. Facebook, as always, was originally at the forefront of the pack, launching its “preferred marketing developer” program in 2011, followed by sponsored stories, and then mobile ads in 2012.

Today, just about every social service has similar tools in place; the widespread adoption of these ad tools – along with the steady decline of organic reach – has transformed social media from a marketing platform driven by personal communication to one largely motivated by paid, targeted advertising. Social media is also more important for reputation management than ever before, as reviews and testimonials become more important (particularly on Facebook), driven by the rise of sites like Yelp.

The underside of all of this progress? The increased competition to be visible on social media (preferably for as little money as possible) has spawned a culture in which many are turning to black hat tactics to succeed; such tactics include buying fake followers and encouraging the rise of bots, which have been used to spread falsified information and even hack users on Facebook and Twitter.

So, that’s how we got from SixDegrees to Snapchat, how Facebook grew from a dorm room joke to a $400 billion company that could well one day provide free WiFi to the entire world (oh, we didn’t mention that little plan?).

Of course, there’s still a long way to go! The story of social is still being written every day by countless users, brands, advertisers, and developers eager to craft the next big thing. If you want to be on the front lines, don’t hesitate to reach out to Geek Chicago! Our team is always here and ready to chat about what it takes to compete – and innovate – with your social media marketing efforts!

We hope you enjoyed this little look at the past, present, and future of social media marketing, one of the most important facets of a comprehensive digital marketing campaign. This is part one of a multi-part series designed to spotlight the history and evolution of digital marketing as we know it; be sure to check back in the next few weeks for looks into the history of SEO and email marketing!