The State of Social Media Platforms in 2019: Where Should Your Brand Be Putting Its Focus? 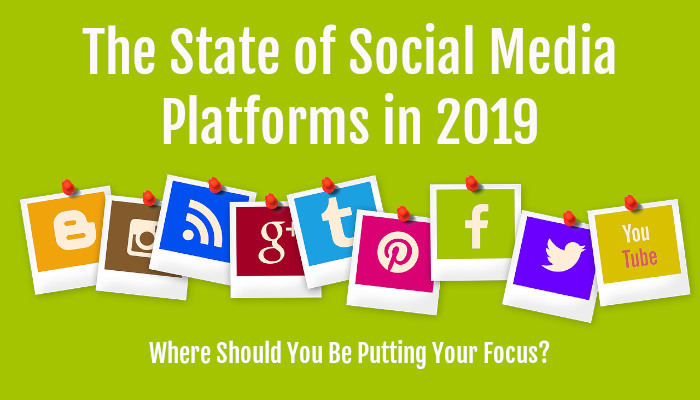 Maybe you’re a brand that’s focused on attracting active young consumers. Maybe you’re a B2B organization looking to reach influential industry decision makers. No matter the target demographic that you want your branded content to reach, social media is a powerful tool for extending your brand messaging and connecting with your ideal audience in 2019, and beyond.

The ways in which people interact with different social media platforms can change quickly. As a result, it is important to stay up-to-date on audience changes on these various platforms over time. That can mean keeping a close eye on both recent updates and more long-term audience trends, as well as staying apprised of new ways of leveraging these platforms, such as influencer marketing.

As you prepare to launch or fine-tune your social media marketing efforts, it helps to monitor how your current and prospective audience members interact with different platforms, in order to create the most effective strategy for reaching your audience.

So, how are audiences using social media right now - and what might these trends mean for the future of your social media marketing? Let’s log in and explore the state of five major social platforms, for 2019 and beyond:

Facebook has been in the news quite a bit over the last few years - for better, and for worse. As this platform experiences an ongoing evolution, it is refocusing on how its core features operate, including emphasizing groups and further refining the utility of the newsfeed for users. As one of the single leading players in the digital marketing space (second only to Google), Facebook can be a powerhouse for bolstering your brand’s reach and growing your audience - if you employ its features strategically.

First, it’s important to understand Facebook’s shifting audience. According to a study conducted by Pew Research between 2018 and 2019, Facebook’s net daily usage amounts to 74%, the highest of any social media platforms. However, the amount of time users spend on the social network site across all devices has been in decline recently. Currently, Facebook users spend 38 minutes a day on the site, down a staggering three minutes from 2018. This metric is projected to drop an additional two minutes by 2020, according to research cited by Search Engine Journal.

Facebook is also a noteworthy platform for creating and hosting paid ads. Paid social media advertising through Facebook and its affiliate network (including Instagram and thousands of different websites) can be an effective tool for expanding your brand’s reach, generating engagements, and driving traffic and conversions. This is an aspect of the Facebook product that has seen growth in 2019. In fact, according to CNBC, ad responsiveness has been on the increase recently. In the United States, the monthly median of ad clicks has risen from 13 to 17, post likes from 9 to 13, and comments from 6 to 8.

The takeaway? Facebook is still a powerful tool for building an organic audience, but its use is increasingly in the promoted ad space. Marketers looking to make the most of this foundational platform would be well-served to consider the benefits of SMM, and refine their approach to organic marketing, focusing on generating positive engagements and becoming active in groups and other communities. Meanwhile, brands may want to diversify their social media efforts, exploring additional platforms where audiences remain engaged and usership continues to grow.

Originally an app strictly limited to passing around photos, today, Instagram has grown into one of the dominant forces in the social media ecosystem. According to Social Media Today, the app boasts over a billion monthly active users, taking advantage of the platform’s wide range of features including IGTV, Stories, and its traditional feed function.

One of the draws to Instagram is its Stories feature. These temporary photo and video snippets have their own feed and let your followers know what happens during your day-to-day. Reporting from eMarketer notes that “...features like Stories, influencer content and video are all contributing to more engagement and a slow but steady uptick in time spent on Instagram,” according to principal eMarketer analyst Debra Aho Williamson.

Though Facebook has a similar Stories-like feature, Instagram Stories ranks highest for daily users, registering more than 500 million to Facebook’s 200 million, according to Social Media Today. Instagram users are active and engaged, and fairly loyal to the platform. This platform is also largely seeing audience growth, whereas more legacy platforms are seeing some minor contractions. At the same time, it’s also important to note that Instagram users skew young, with data from Pew Research indicating that this social network is an ideal platform for those looking to target the age range of 18-24.

What’s the bottom line? Instagram (or Instagram By Facebook, as it may soon be known) is a platform on the rise, drawing loyal young users thanks to its diverse array of features, its active base of influencers (more on that in a bit), and its sophisticated marketing and ecommerce tools. It’s a powerful way to reach audiences and generate engagement and brand loyalty. With that said, Instagram has gone through its own minor turbulence in recent months, experiencing corporate shakeups and experimenting with core platform revamps that could dramatically change the organic functions of the platform. As such, it remains to be seen if the platform will continue its ascendancy moving forward.

Snapchat and Twitter burst onto the social media scene as young upstarts, only to generate controversy - and fail to make the world-changing splash they promised, according to some critics. Where do they stand in 2019, and what should businesses keep in mind?

If you’re looking to expand your brand’s profile to a younger demographic, Snapchat sees a steady base of young-skewing users, largely featuring older teens and young adults. According to a study conducted by Pew Research, the majority of time on Snapchat (62%) is spent by 18-29 year olds.

With that noted, there are more than 326 million average monthly Twitter users globally, including a core group of influential politicians, media personalities, writers, and others who make up a strong base of power-users. The platform is also still a go-to site for breaking news updates and conversations.

Like the other social media platforms, both Snapchat and Twitter have experienced ups and downs in recent years. For instance? Snapchat made a decision to perform a major redesign during the spring of 2018, leading to an enormous cultural backlash and causing the platform to hemorrhage users (who could easily flock to Instagram, which has adapted many of Snapchat’s once-unique features). It was a decision the app has only recently begun to recover from in the public eye. Snapchat sees about 203 million daily active users - a number that accounts to an increase of 13 million since the final quarter of 2018, according to Gizmodo. This upwards trend could mean that Snapchat is on its way back to its former glory, dog-face filters and all.

So, what’s the story? Snapchat and Twitter are still powerful and influential platforms, with a lot of appeal to offer marketers - even if they’ve lost some of their luster compared to their buzzy pasts, and their current behemoth competitors. Twitter is the go-to discussion platform for many industries, including B2B-heavy fields like tech and media. Similarly, Snapchat has a core base of younger users, and is gradually expanding advertising capabilities on its platform.

Social media marketing isn’t just about consumer-focused platforms. Many brands - particularly in the B2B space - can experience great success focusing their social media efforts on platforms catering specifically to business and professionals, particularly the main player in this space, LinkedIn.

A favorite of professionals and businesses, LinkedIn is geared towards helping people connect through professional-oriented networks, and can be a beneficial choice for brands looking to connect with other businesses, or corporate decision makers.

While you won’t find influencers on this platform, other features draw in a substantial and growing user base. Data from Hootsuite states that LinkedIn sees two new users joining the site every second. To that end, the platform has seen substantial overall growth over the last several years, “from 467 million users in Q3 2016 to 590 million by the end of 2018.” LinkedIn’s audience largely skews a bit older (25-49, by some metrics), and is a go-to platform for B2B decision makers, including CEOs and department heads.

Want to put this platform to work? Leveraging LinkedIn for marketing is a lot like using other social media platforms. Users can connect by sharing relevant, compelling content, and building a network through LinkedIn’s robust groups, which consist of everything from alumni chapters to local industry-specific pages. LinkedIn also offers various forms of multimedia content (including slideshows), as well as robust targeting and paid advertising tools.

The New Platforms on the Block

Though it’s great to amp up your social media presence on long-established platforms like Facebook or Instagram, there’s merit in some of the newcomers to the field, as well.

Platforms such as TikTok cater towards the younger crowd, specifically users aged 16-24, according to The Social Report. The app is a place for users to post and edit video clips, usually with a humorous or musical angle. TikTok posts are also often reposted to platforms such as Instagram and Facebook, making it a beneficial addition to your brand’s social media strategy if your intended audience falls in this younger crowd.

Why keep an eye on TikTok, among other nascent social media platforms? Well, for one thing, the app boasted 27 million active users in the US as of early 2019, according to a report from Vox. The TikTok app also surpassed all other social media apps in terms of monthly installs in the Apple App Store back in 2018, and was downloaded more than one billion times in that year alone.

Influencers: Are They Worth It?

When the word “influencer” comes to mind, you might think of Instagram accounts with hundreds of thousands of followers or celebrities who take part in paid ads for various products and businesses. However, the role that influencers can play may vary based on their follower counts, and not all businesses need the quote-unquote top dogs.

One influencer strategy that could be added to your social media efforts is the idea of partnering with locally-focused accounts on Instagram or Snapchat. Though these social media users won’t necessarily have a globally sized following, their followers might be more closely aligned with your target audience, and may respond well to references to your brand or service.

It’s important to have the right mindset when you consider the possibility of starting with influencer marketing.  In an interview with New York Times writer Kevin Roose, Youtubers author Chris Stokel-Walker says that like other business owners, influencers should be thought of as entrepreneurs. They are contractors and vendors, and it’s worth considering whether you want to put your focus on this specific form of marketing, or focus on a more holistic approach.

Looking at 2019 and beyond, choosing the “right” social media sites to help build and maintain your brand will depend on your target audience and what type of business you run.

Facebook and Instagram remain a stable bet if you’re looking to increase your reach, due to these platforms’ high number of active users and powerful advertising tools, while Snapchat and TikTok may have merit for reaching a younger audience. With any social media strategy, it’s important to monitor your processes and results on a consistent basis - including reach, engagement, audience growth, and other key metrics - to ensure you’re focusing on making the right moves for your brand.

Wondering how social media can help you and your business cater to the most beneficial target audiences right now? Need some assistance figuring out how to decide what the best platforms are for you in today’s digital marketing landscape? Drop us a line to keep the conversation going on SEO, web design and development, social media, and all things geeky.