App of the Week – Stations by Spotify 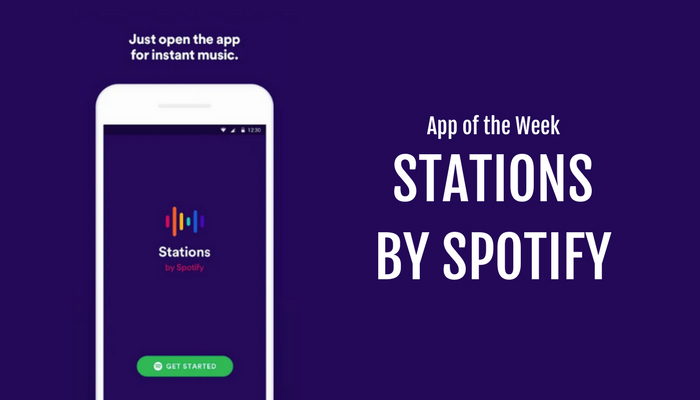 If you’ve ever spent hours scrolling through Netflix without being able to make a decision on what to watch, then you’re familiar with the problem of infinite choice.

Basically, it goes like this: The more options you have, the harder it can be to make a selection, and then the harder it is to fully enjoy the choice you do end up making.

To combat this growing problem in the internet ecosystem, a lot of content providers are actually finding ways to streamline and speed up their users’ selection process – or take the burden of choice off of them completely!

Stations by Spotify is one such app. Billed as “an experiment by Spotify that makes it easy for anyone to listen to great music,” Stations is a standalone program that does away with a lot of the bells and whistles of Spotify’s core product, and instead focuses exclusively on playlists.

Recognizing that “when you have access to all the music in the world, finding the right thing to play can feel like a challenge,” Stations offers users a list of available stations when they open the app, ranging from “Feel Good” to “Jazz” to “Aussie Top 40.” Users just choose a station, and then let the tunes flow. The app makes it seamless to switch from station to station whenever you’d like, and the more you listen and rate songs, the better Spotify’s algorithm will get at personalizing stations you’ll love.

While the app is still being rolled out around the world, early reviews are incredibly positive. Android Central calls Stations “clean, beautiful, and a lot of fun to use,” and says it “beats Pandora at its own game.” Similarly, tech website The Verge speculates that Stations could be a great option for “millions of free users who want a convenient, lean-back experience with little user input required.”

For now, Stations By Spotify is an Android exclusive, and it hasn’t been made available everywhere yet (including, notably, the United States). Still, it’s worth keeping an eye out on what Spotify does with Stations in the months ahead, as the streaming giant goes public and continues to extend its reach in the music industry.

Think there are any other cutting edge music apps our team should try? Let us know over on Facebook or Twitter, where we keep the geek speak going 24/7.