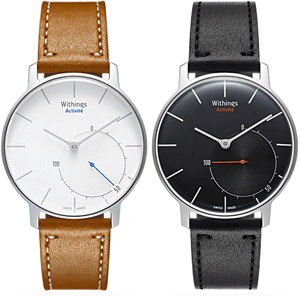 Smart watches have been getting a bit of press recently, and they have certainly generated some intrigue amongst the public. A common concern for many prospective consumers has been, however, that smart watches just are too clunky to be worn by the average person.

According to a recent article in USA Today, however, there may be a new fashion-forward smart watch on the market.

The Withings "Activité" watch is one that seemingly brings a chic look which the smart watch category has been lacking. This model appears like a classic wristwatch would - no date, no second hand, but additionally no crown necessary for winding it up.

The Activité comes with activity tracking (walking, running, and swimming - yes, it is water resistant and comes with a plastic band for the pool), sleep tracking, and a silent vibrating alarm. It goes without an internal rechargable battery, but it does last up to a full year on a single button cell.

It partners up with the Withings' Health Mate app (currently only compatable with iPhone) which allows you to set goals for daily movement. The watch talks to your phone via Bluetooth Low Energy, conserving energy while maintaining your stats.

Is the watch a cutting edge geek tool? Probably not. The model does, however, indicate that the trajectory of wearable technology has the ability to appeal to those wanting the benefits of wearable technology without advertising it to the world. The Activité also provides a new option for designer watch consumers. Why just get a watch that tells time, when you can have the same look with a 21st century twist?