The Under-the-Radar Social Trends You Should Be Following 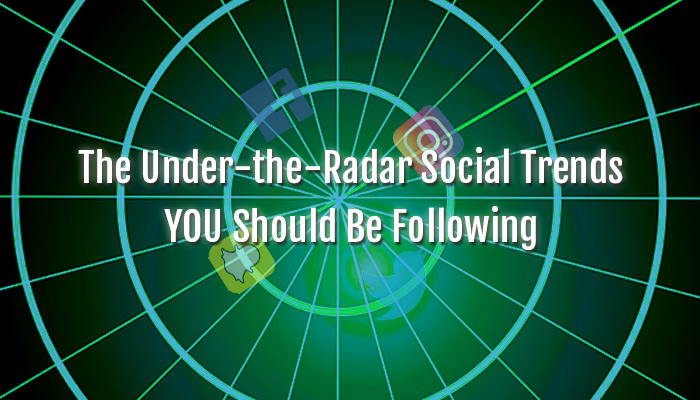 We love to keep an eye on the various ways that content marketing – including blogging, email, and social media – changes over time. But statistics, shock value, and industry-approved talking points only get us so far.

With that in mind, let’s take a look at three major social media trends that have flown under the radar in 2016 – and explore what they may mean for digital marketers in the months and years ahead:

Since the advent of social media, there has always been backlash, often tied up in questions of privacy. Should we be comfortable letting third parties have access to so much of our information? Is it OK to publish personal content on Twitter or Instagram for what is essentially a public, worldwide audience?

Well, consumers have spoken, and social media is increasingly becoming a less public affair, as traditional channels cede ground to services like Snapchat, WhatsApp, and even Facebook Messenger, which all emphasize more private, direct communication(that doesn't always mean your private communications are safe.) We’re also seeing an increasing lack of “personal” content being posted across Facebook and Twitter, and more Instagram accounts are being set to “private,” particularly among millennials.

We’ve talked before about Twitter’s switch from a purely chronological timeline to one that promotes popular, relevant content to the top (rather than simply slotting in tweets as they get posted). And Twitter isn’t alone in tinkering with its timeline. In recent months, Instagram has rolled out a new algorithm that has left many users flummoxed, while Facebook has attempted to “build a better newsfeed” by emphasizing posts from “friends and family,” rather than branded content or clickbait.

The main takeaway? Social media is always in flux, and marketers need to be ready to roll with the punches. The techniques that have traditionally worked won’t stay relevant forever, and it’s important to stay aware of the best practices for each of your preferred platforms, the better to promote sharing, discovery, and conversions.

Just as our social platforms are dynamic and ever-changing, so are the massive (and still-growing!) audiences that use them each and every day. User expectations in 2016 are wildly different in many ways than they were just a few years ago, and it’s important for marketers to be willing to pay attention and adapt to changing audience tastes, in ways both large and small.

What do we mean? Well, on the “large” side of the spectrum is the massive, culture-wide shift to mobile devices, which by some metrics account for 85% of Facebook’s users, and 80% of Twitter’s. But this shift in consumption has also led to a shift in what we want to consume. For instance, while “vertical video” was once considered taboo, it is now increasingly the norm, due to the rise of Snapchat and other social, mobile-first video services.

Similarly, user expectations about load times have gotten shorter and shorter over the years; a majority of mobile users are willing to wait just six seconds for a page to load – which is going to have a massive impact on the way we code and optimize our sites for responsiveness, moving forward.

All of these little trends, spikes, and ebbs add up to a sprawling picture, one that can be a little hard to keep a firm grasp on. That’s where we come in! Our team of Geeks eats, sleeps, and breathes content marketing, including blogging, social media, and web development. Ready to redefine your brand on social media? Drop us a line to talk strategy!