Are We Heading For an “All Video” Future? Not So Fast. 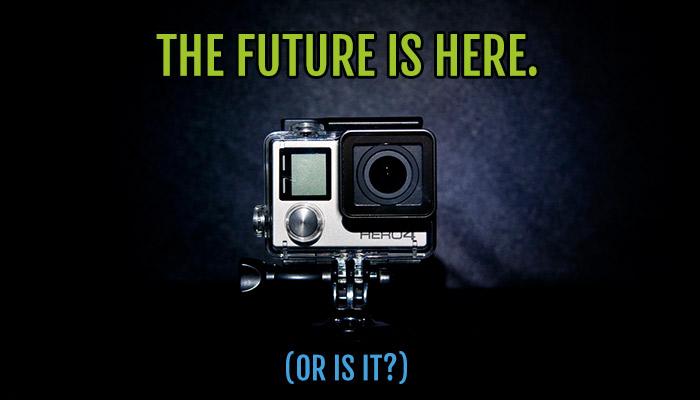 Scroll through your Facebook or Twitter feeds or click around on any news platform, and it becomes clear that video is having a major moment. And if some prominent industry insiders, like Facebook CEO Mark Zuckerberg and international vice president Nicola Mendelsohn, get their way, streaming video won’t just be a flash in the pan – it will be the defining feature of our digital future.

As Mendelsohn said recently at Fortune’s “Most Powerful Women” international summit, Facebook may well be “all video” within five years’ time. As she explained:

In that same discussion, Mendelsohn noted that Facebook was seeing a “year-to-year decline” on text, a result born both of Facebook algorithmically promoting video and as an organic result of changing user tastes. As Fortune notes, Facebook users alone watch “an average of 100 million hours of video on mobile every day,” while “daily views” have leaped from 1 billion to 8 billion in just one year’s time.

Taken together, all of these statistics beggar the question: Will the written word be dead within five years?

Don’t buy the coffin just yet. Video is currently the king of content, but it’s far from the end-all-be-all. In fact, we’d say that rumors of text’s death have been greatly exaggerated, for a number of reasons.

For a start, there’s the simple fact that not all users prefer video. If you’re a video skeptic, you’re not alone: A 2016 Internet Patrol/Osterman Research survey found that plenty of users still prefer to consume their information as written content. According to the poll, a full 74% of users would prefer to read a two-minute news story at work, compared to just 19% for its video equivalent; that trend held steady for users at home, as well, with 62% of respondents opting for a written story and just 32% preferring video. Users also opted for text for more dense subjects: Survey responses at home opted for the text version of “an explanation of the current financial crisis” by a nearly 20% margin.

Why are some users more resistant to video? Consumer behavior expert Liraz Margalit does an excellent job of unpacking the differences between video and text consumption at Psychology Today.

Margalit argues that our brains process text and video in two different ways. Reading, she explains, is an active cognitive process, one that “requires the production of ‘inner voice,’ which dials up our attention span;” in contrast, watching video is a passive process, a more “automatic” response that takes “a lot less energy and effort.”

Because of these differences, video and text excel at triggering different types of users. “Goal-oriented” visitors – those who have a specific need or cause when they log in online – are more active online, and thus more willing to “use up cognitive resources” and choose text. On the flip side, "unintentional visitors,” those who are just browsing – or aimlessly scrolling through an endless timeline, a la Facebook – are more likely to choose video over text; these types of users are more willing to let the site guide their interactions, and are more likely to be triggered by “colorful images, embedded video, attractive headlines and catchy slogans” due to the power of “emotion-based processing” (appealing to which has long been the bread-and-butter of viral content farms like Buzzfeed, Upworthy, and most recently, recipe video repository Tasty).

Of course, as Margalit notes, there are many other factors influencing media preference. There are some users, for instance, who are more likely to choose text because it offers a greater sense of control. And once a habit has been established – that is, once a user has set a precedent for preferring video or text – he or she is more likely to return to the same medium again and again. For this reason, many older users, more accustomed to the written word, prefer articles and text; younger audiences, raised in an environment where Snapchat and YouTube have always been the norm, habitually gravitate toward video.

So, in sum, a hearty preference for reading to video is hardwired into some of our brains, deeply intertwined with what we actually use the internet for. But this is to say nothing of the fact that, in many respects, reading text offers a number of practical advantages to consuming video.

Let’s go back to our brains for a second. If we accept that the average reading speed, according to Forbes, is about 300 words per minute, then the average person may just be able to read an entire article in the time it takes a video to load (hence why “4 out of 5 users will click away if a video stalls,” according to Google).

And while videos are incredibly effective at funneling information at us, they are also necessarily linear. Reading gives us the invaluable opportunity to skip around, to speed read or scan, to pull out the one fact that we came for and then quickly move on to the next item on our to-do list. A video, by its very nature, gives out information sequentially, making it much harder to jump around. Skipping ahead ten seconds may just cause you to totally miss the one fact you originally came to learn. This is not to mention that, even in 2016, many of our video streaming options are garbage, and skipping ahead ten seconds may just cause you to wait for an additional 20 seconds of buffering.

And what about those coveted mobile users who make up the bulk of online traffic these days? Sure, they make up a huge share of video viewers, but is watching a video, complete with sound, always going to be the best option when you’re traveling with a less-than-optimal WiFi signal? When you’re on a crowded train car without your headphones? When you're [ahem] in a bathroom stall at work?

Don’t get this wrong! Video is very much the future. But it’s just important to take a step back and create some perspective, separate from the fervor – especially when you consider that video ad spending reached more than $5 billion this year, but that just above one-third of users actually trust video ads.

Video is here to stay, as Facebook execs believe, but it’s not the only avenue available for your content marketing solutions. Instead of putting all of your eggs in one basket, diversify. Remember that blogs, infographics, podcasts, and image galleries will always be vital content marketing tools, and that the next big thing is always just around the corner. There will always be a place for new creative solutions, for multimedia opportunities we haven’t even dreamed up yet, and, yes, for letters and words.

After all, even if we do bury and buy a headstone for the written word, someone’s going to have to chisel in the “R,” the “I,” and the “P.”

Want to talk more about the future of content marketing in all its forms? We’d love to keep the conversation going! Why not drop us a line on Facebook or Twitter?