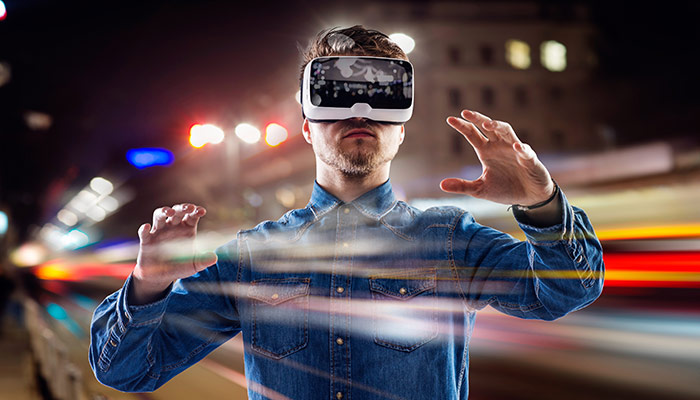 For decades, virtual reality has been one of the great white whales of the tech industry, an elusive goal that has always remained just out of reach.

After years of fits and starts – from clunky novelty headsets to inexpensive peripheral add-ons like Google Cardboard – 2016 may finally be the year that virtual reality (VR) goes mainstream.

Here at Geek, gadgets are a passion, and we’ve been following the steady rise of VR with all the excitement of a kid on Christmas Eve. Let’s take a look at the virtual reality offerings that may (or may not) soon be changing the way we can watch, play, and interact with the digital world:

Oculus is as close as the VR marketplace has to a household name right now, thanks to its rags-to-riches origin story (the idea started as a Kickstarter but was bought by Facebook for $2 billion), and due to the buzz around its two flagship products – the breakthrough Oculus Rift, and the more accessible Samsung Gear VR, Powered by Oculus.

Heavy-hitter Rift has been called “VR on steroids;” the company claims the tech offers an immersive, high-definition, and intuitive VR experience, thanks to a light, state-of-the-art headset and easy-to-master Touch controls. Rift has been available for preorder for some time now (units started shipping in March, though wait times are quite long due to demand); in an interesting move, Oculus released the Rift to 48 Best Buy locations on May 7 for in-store demos, at the same time shipping out a very limited number for purchase in Best Buys and through Amazon and the Microsoft Store.

In contrast, Samsung Gear has been available online and in brick and mortar stores for some time now. Whereas Rift depends on the power of PC technology for its viewing and gaming options, Gear VR promises to “unlock your smartphone’s hidden power” for around $99. The unit – a peripheral that hooks onto your phone, not unlike Google Cardboard – allows you to turn your compatible Samsung phone into a home theater or an immersive gaming platform, made even better with a wireless gaming controller.

Brought to the market by HTC and Valve and powered by SteamVR, this VR system has been racking up hype from outlets including Thrillist and Slash Gear. Unlike Oculus Rift, the Vive offers 360 degree motion tracking or “room-scale VR,” which allows greater opportunities for exploration and interaction with your virtual environment.

You can preorder an HTC Vive bundle – which includes a headset, two controllers, and two “base stations” – for $799 as of the time of writing. Don’t want to shell out that sum just yet? Curious techies can explore the technology more, thanks to demos available at select Microsoft and Gamestop stores around the country.

Is Apple going to be making strides into the VR battlefield? All signs point to yes.

Back in February of 2016, a client note from Piper Jaffray analyst Gene Munster set off waves in the tech world. In the note, Munster explained that “he expects Apple will add VR to its MFi (Made For iPhone) program in two years, which would allow third parties to make Apple licensed and approved VR headsets for iOS devices,” according to Business Insider.

And that’s not all. There are plenty of signs that Apple is ready to take on the VR market on its own. According to reports from Forbes, the company has been heavily recruiting “app engineers experienced with 3D graphics, virtual reality, and augmented reality” since 2014, and the company has made a number of other interesting moves, including snapping up a slew of companies, particularly German augmented reality company Metaio, which has developed AR apps for brands like Ferrari and IKEA.

As for what this VR product may actually look like? The signs point to a device centered around iOS devices, which may mean a variation on the Samsung Gear concept. Beyond that, all we can do is speculate – and when it comes to VR, geeks have already been doing that since Tron.

Of course, gadgets are just a hobby for us at Geek Chicago – but digital marketing is our life! And while we’re always ready to talk tech, our bread and butter is connecting businesses across the country with content marketing that works, from intuitive, mobile-optimized web design to a comprehensive social media strategy. Drop us a line today to find out more or get started!