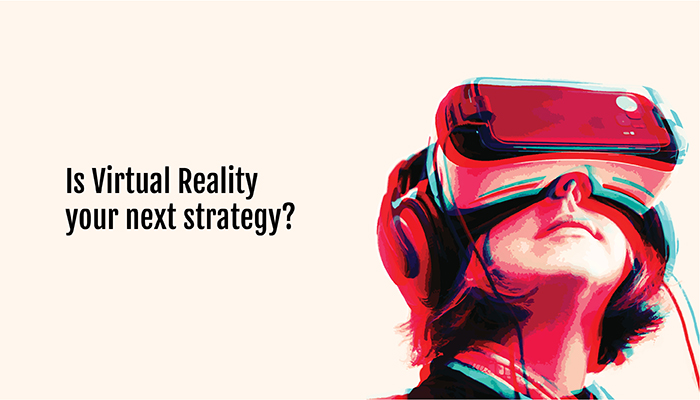 “The world is no longer flat. The internet is fast-becoming a place you step inside. Just as you had to make your site responsive for mobile, so too will you have to make it responsive for VR.” - Sarah Hill, CEO and chief storyteller for StoryUP

When Sarah Hill talks about VR, we should all listen. Her company, StoryUP, has been one of the early pioneers of virtual reality experiences for brands, and they’ve done some astonishing work in using the power of VR for Fortune 500 companies and grassroots charity organizations alike.

VR has long been called the future of tech. It’s a fast-growing field, and it’s been one of the buzziest sectors of the tech marketplace for some time now – so much so that it’s even been targeted for satire by HBO’s Silicon Valley.

2016 and 2017, in particular, have been huge for VR; in many respects, the last few year were when the technology – long considered a futuristic goalpost, rather than a practical utility – went mainstream. Google Cardboard came onto the scene, as did several iterations of the Samsung Gear VR, and, of course, the mac daddy in the field, the ur-powerful Oculus Rift.

With all of this being said, however, the idea of VR becoming a staple of content marketing still feels like a bit of a pipe-dream. Hill herself acknowledges that “we are in the ‘brick-cell-phone phase’ of VR;” similarly, the marketing experts over at Hubspot admit that VR isn’t the most accessible content marketing strategy at present, writing:

“Should you overhaul your entire content strategy to make room for virtual reality? For most of us, the answer is no."

But with VR only poised to grow in accessibility and cultural importance in the years ahead, it can’t hurt to think towards the future. What benefits could VR-centric content marketing offer a local brand? What could those content campaigns look like – and what would they cost?

Why Does VR Matter for Marketers?

Content marketing has always been about straddling two sides of the fence at once. On the one side, you’ve got the reliable standbys, the essentials of digital marketing, including SEO, SEM, email, and social media. On the other, you have the new media opportunities that content marketers, by necessity and opportunity, are always exploring – podcasts, quizzes, interactive games, videos, augmented reality, and, yes, VR.

What we’re saying is that successful content marketing must always be effective at maximizing and maintaining the strategies that are working, while keeping abreast and pursuing the next big content opportunities that could become mainstays themselves.

And there are plenty of reasons to believe that VR could become that next big thing, the one that transcends “flash in the pan” status and becomes a digital marketing cornerstone in its own right.

Certainly, consumers believe in the power of VR. In fact, according to research from Greenlight Insights, 62% of consumers say they would feel more engaged with a brand that provides a VR experience, while 71% report that they would call a brand “forward-thinking” if it used VR.

And it’s not just customers who care about VR; major brands are catching on, too. In fact, in its 2016 report “Virtual & Augment Reality: The Next Big Computing Platform?” experts from Goldman Sachs Research determined that they “see qualities in VR/AR technology that can take this from niche-use case to a device as ubiquitous as the smartphone.”

And for the pioneers over at StoryUp, there is hard data that VR works as a content marketing delivery channel. In particular, Hill notes that VR is “a powerful tool for calm, joy, and empathy,” and that it’s highly effective at soliciting “brain reactions like hope, joy,” and “motivation” – many of the same emotions that drive clickthrough and engagement for more traditional content marketing channels.

So if VR is so effective at targeting the emotions that directly lead to engagement and conversions, and it’s largely viewed positively by brands and customers alike, why hasn’t it already become ubiquitous?

A lot of it comes down to accessibility and cost. While Google Cardboard and Samsung Gear headsets are on the more affordable end of the spectrum for consumers, Oculus Rift technology still runs in the hundreds of dollars per unit, making it unaffordable for most consumers.

And then there’s the matter of actually creating a VR experience, which requires a high degree of specialization and technical expertise. In addition to having a firm grasp of non-linear and experiential storytelling, anyone attempting to create a VR experience will also need to be able to access a variety of camera equipment, editing software, post-production software, and rendering technology. It’s an exhaustive and complex process to successfully execute an effective VR experience; at present, there aren’t too many firms specializing in VR, and they can be extremely expensive to contract with.

As Hill notes, any brand looking to produce VR content should know that “a VR video costs at least three times that of a regular video;” she explains that experiences can sometimes “range anywhere from $35,000 and up,” and that she’s seen some bids come in at a “half-million dollars.”

What Are Some Examples of Successful VR Content Marketing?

With all that being said, there have already been some remarkable VR content marketing experiences, driven by brands that do have the reach, the resources, and the determination to have a go at it.

Here are a few worth checking out if you want to get inspired by what VR can do – and where it could go in the future:

Stubhub
For anyone who’s ever bought tickets through a resale vendor like StubHub, there’s one question that inevitably comes up: “Will the view from my seats actually be worth the price?”

Well, StubHub seems to be reading all of our minds, because they now allow any user with a Cardboard or Gear VR to get an immersive, 360-degree “virtual view” from their potential seat – without ever having to leave their iOS or Android app.

You can read more about StubHub’s experiment with VR here, via Recode.

Shopify
Online retailer Shopify is no stranger to innovating the ecommerce experience, but their foray into VR may just take the cake.

Called “Thread Studio,” the VR app, available through Steam, allows users to upload their favorite designs or logos and try them out on different shirts or other merchandise in real time, allowing them to see what their finished product will actually look like in three dimensions, rather than forcing them to judge via their flat laptop or smartphone screen.

You can read more about Thread Studio – and Shopify’s further commitment to VR experiences for ecommerce – here, via Medium.

Lowe’s
Ever wondered what your home would look like with all sorts of upgrades or renovations, without having to consult with a contractor? Home improvement giant Lowe’s has you covered.

Their VR experience, called Holoroom, allows users to visualize their home improvement project in three dimensions. Using an app, visitors to Lowe’s stores could design a dream room by placing furniture pieces or design elements; they could then slip on the VR headset to fully immerse themselves in their virtual living area.

To learn more about Holoroom – and other tech innovations – you can visit Lowe’s Innovation Labs online here.

What do you think about VR? Is it the next big thing, or just a bunch of ones and zeroes? We’d love to hear from you, so don’t hesitate to drop us a line on Facebook or Twitter, where we keep a finger on the pulse of the past, present, and future of digital marketing.

And don’t forget, Geek Chicago is here to help with all of your content marketing needs, from web design to social media. Feel free to check out some of our past projects or reach out today to see what we can do for your local business!