Welcoming the New Android 4.4 with Many New Features 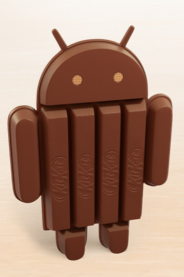 We're Geeks, so of course we're exited to be taking a look at the new Android OS (vs. 4.4) affectionately known as "KitKat". Here are the updates you can expect.

The new Android has been optimized for phones with lower memory capacities (512 MB of RAM memory). How? Mainly through internal code optimizations, but additionally Android is now offering optimization tools for app developers.

The update also better protects the memory that is occupied by vital spaces, and has a sequential service loading procedure which helps to avoid the RAM memory becoming full.

The new update focuses on providing a more transparent navigation bar and notification services. This is good news for app developers in particular, because they can utilize this new feature to better integrate their apps with the graphic life of the phone. It also makes more of the screen real estate available for full-screen apps.

4.4 brings a new phone dialer interface that has been vastly improved with an "auto-complete" feature. It also learns your phone calling habits and provides you with a list of your most used phone numbers for easy access. Finally, it relies on Google's vast database to identify calls from telephone numbers that are not already in your book. Cool!

Just as was anticipated, Google Hangouts 2 is essentially replacing the "texting" module found on previous versions. This means all messages are centralized in a common inbox area - text messages, MMS messages, video messaging, and other forms of messaging will all be localized in Hangouts 2.

It Looks and Feels a Little Nicer

Not only is there now a "full screen" display in the lock screen, but Android 4.4 now sports a nicer font, and integrates the keyboard with Emoji (y'know, those smiley face things.) :-) Additionally, email now looks nicer with an "images with contacts" feature.

Android now supports printing to Google Cloud Print printers, and directly onto wireless printers with Android support (like the HP ePrint). You can print right from your phone. Seem like a feature you'll never use? Just wait... trust me.

Video Functionality is Getting Interesting

With Android 4.4, there are now some interesting features along with your video watching experience. You now have: support for video screen capture, Close Caption, Bluetooth support, native IR transmitter support, audio/video sync for apps, and more.

The Android 4.4 KitKat update is now readily available. Note that the older Galaxy Nexus will not be getting an update.