What’s the Best Font For Your Website? It’s Complicated 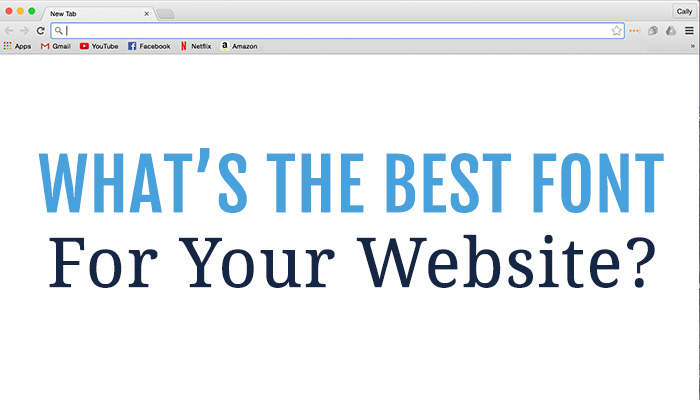 You’re a web design expert with an easy-to-use site that’s optimized for mobile and features a ton of great, consistently-updated content.

But have you ever stopped to think about the font on your site? Could the typeface you’re using be turning off readers before they even start digging into your blog or moving through your conversion funnel?

Whether you consider yourself an online calligrapher or you think Georgia and Arial mean the state and the Disney princess, here’s what the experts have to say about using fonts online…

Serifs are those small curly flourishes on each letter, often called feet, while sans serif are letters with clean lines.

Examples of frequently-used serif fonts include the aforementioned Georgia, along with Times New Roman and Cambria. Along with Arial, popular sans serif fonts include Calibiri, Verdana, and Helvetica (a typeface so ubiquitous they made a movie about it). Which works better for your site?  Conventional wisdom says sans serif. Here’s why:

The Case for Sans Serif
It is generally agreed that serif is the better font for print. Some say this is because serif fonts were used for the Dick and Jane books, which were the first things many baby boomers read. Others say it’s because the decorative flourishes make individual letters more distinctive and therefore easier for our brains to recognize quickly.

But even though you’re reading, the web isn’t print. It has a much lower resolution than print, which makes small serif characters, with their complex shapes, more difficult to read. Therefore, a serif type is generally not recommended for the web.

On the other hand, we all spend half our day online reading sans serif text in the form of emails and tweets, so it has become second nature. There are many sans serif typefaces that that are more legible at any size than some serif designs. Therefore, a sans serif type is generally recommended for the web. But which type? That’s where things get trickier.

Finding the Font For You

But is there one font that is universally agreed-upon by the experts? Unfortunately, no. Design is a tricky thing, and there are a lot of factors that go into making even this basic decision. When it comes time to choose a font, above all take into consideration readability and compatibility, as well as your company’s branding.

Let’s start with the obvious: Your font should be as readable as possible. If your font is easy to read and visually appealing, you’re in. On the other hand, if your typeface is something commonplace or ugly – think Times New Roman or (heaven help us) Comic Sans – your potential customers will go the way of the linotype machine (for those who don’t know what linotype is, well, we rest our case).

It’s important to choose a font that’s common enough to be readily accessible, but not so omnipresent that it makes your reader’s eyes glaze over. Compatibility comes into play here: If your visitors don’t have your particular font on their computer, their browsers may default to another font, perhaps throwing your entire design scheme into disarray. This is even more important when it comes to mobile optimization, which has become vital for both accessibility and SEO.

And, once you’ve accounted for usability, be sure to select a font that conveys the style and personality of your product or service, which should also inform the look of your site in general.  If you have a traditional, consciously old-fashioned site - perhaps for a rustic restaurant or bar - you might want a more traditional sans serif font like Verdana. If you want a sleek, modern look consider, something like Helvetica.

For example, are you curious what fonts we use at Geek Chicago? We're all about forward-thinking simplicity, and our text reflects that: Our headlines are all in Fjalla One, a chunky sans serif font, while our text body is in the simplest sans serif, Open Sans.

In the end, fonts open a world of possibilities, and the choice is all yours. Whether you need to pick between Georgia or Arial or you just want help with any step of the web design process, feel free to drop Geek a line! Our talented team is here and ready to help with all of your content creation, social media, and web design needs.